What is the state of media freedom in Afghanistan six months after the Taliban took power? In the previous session of Media Freedom Talks, DW Akademie, in cooperation with Reporter ohne Grenzen, discussed this topic. 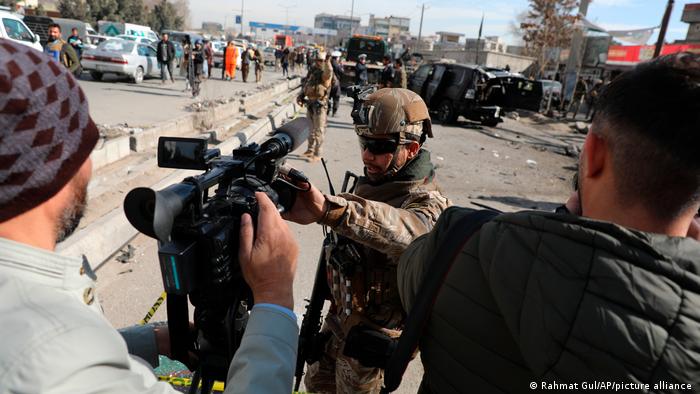 Six months after the fall of Kabul, the situation for media professionals in Afghanistan was, and remains, catastrophic. Since the Taliban took power on August 15, 2021, already precarious working conditions across the country deteriorated significantly. More than 200 media outlets have closed down just in the past twelve months and well over 6,000 media workers have lost their jobs.

How has the Taliban restricted media coverage? What does this mean for the population's ability to obtain independent information? What are the prospects for Afghan media professionals living in exile?

In the previous session of the Media Freedom Talks series "Journalism in Afghanistan six months after the fall of Kabul", organized by DW Akademie and Reporter ohne Grenzen, these and other questions were addressed in a digital panel discussion on the situation of media freedom in Afghanistan.

If you missed the talk, watch it here:

Award-winning journalist, former editor-in-chief of Hasht-e-Subh, one of the most prominent daily newspapers in Afghanistan

The event moderator was Waslat Hasrat-Nazimi, head of DW's Dari and Pashtu service.

Afghanistan: How press freedom has crumbled since the Taliban takeover

Thousands of journalists have lost their jobs in Afghanistan over the past few months, with many media outlets ceasing operations due to increasing security and financial challenges.

By imposing new restrictions on the media and female actors, the Taliban have once again reaffirmed their misogynistic ideology, rights advocates have said.

Afghan journalists who spoke with DW say the already-difficult situation for the nation's reporters and other media personnel has become much more precarious under the Taliban.

The Taliban say that they want to ensure internet access in Afghanistan, but they could face substantial technical and financial challenges to keep it running. Afghans say they fear more surveillance and censorship.

This month, DW will expand its media project "Aashti" to include live shows on web TV in Dari and Pashto, Afghanistan's official languages.

China's media strategy in Africa and its impact on the continent

As part of our discussion series "Media Freedom Talks", DW Akademie partnered with Reporters Without Borders (RSF) to host an online panel discussion on China's media influence in Africa.