A press study carried out together with DW Akademie reveals that women working in the media face many obstacles in Burkina Faso's male dominated society - and even more than in the country's other industries. 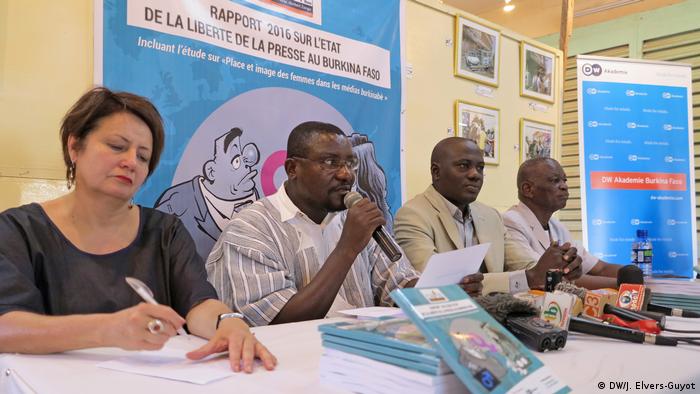 "Journalism is one of the most difficult professions for women," said Diallo Abdoulaye, head of the Centre National de Presse Norbert Zongo (CNP-NZ) when releasing the study results in December 2017 in Ouagadougou.

Most problems arise because women's visibility and independence are not encouraged. In the media industry, journalists have to be flexible and  willing to work at night and on weekends. Travel is often required, as well. As a result, media women cannot run a household or take care of the family in the way that is expected of women there.

Those who resist the constraints and decide to work outside of the home are  looked down upon and in the media industry frequently stereotyped and discriminated. According to the study, husbands are often opposed to wives pursuing journalistic careers. "My in-laws advised my husband to marry a second wife because I come home late and rarely cook," said a journalist from Radio Lutte Contre la Désertification in Djibo, a town in the country's Islamic north.

Only one in four media positions held by women

This is CNP-NZ's third study on press freedom and for the first time focusses on media women. Researchers used a tool developed by the International Research and Exchanges Board (IREX) to help evaluate the media sector. Along with other factors, the study examined legal aspects, the quality of journalism and media management practices in Burkina Faso, and gave the professional situation of media women a score of 1.34 out of four points. 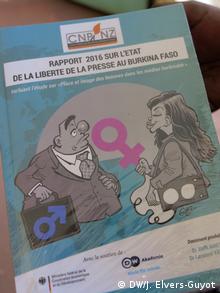 For the first time, the study focussed on women in the media

The study examined 140 of the 237 media companies operating in Burkina Faso. Of the 1,030 journalists working in the country, twenty-five percent are women. In only 12 of the companies investigated do women hold at least 50 percent of the positions. In television, radio and the print media, women hold only 5.24 percent of the management positions.

According to the study, press freedom in Burkina Faso overall deteriorated slightly in 2016, scoring 2.43 out of four points in 2015, compared to 2.37 points in 2016. The decline is mainly due to various terrorist attacks that killed dozens of people. Freedom of the press was also affected by political tensions. Still, Reporters Without Borders' World Press Freedom Index 2017 put Burkina Faso at position 42 out of 180 countries ranked.

“Although things are looking up for press freedom, much still needs to be done and achievements consolidated," said Diallo Abdoulaye of the CNP-NZ. "The study's new data will enable us to evaluate the impact of our work and encourage us to continue fighting for press freedom,” he said.

CNP-NZ's study together with DW Akademie is particularly important for Burkina Faso since it is not among the 31 countries included in the African Media Barometer, developed by Germany’s Friedrich Ebert Foundation. "Every year, this study attracts a lot of attention in Burkina Faso  and it's an honor for us to work with CNP-NZ," said Carine Debrabandère, DW Akademie's country manager for Burkina Faso. "This press center," she stressed, "is helping make the media landscape here one of the most dynamic on the African continent."