Kyrgyzstan: A summer camp about elections and democracy

While some might go to a summer camp wth an aim to pitch tents and build fires, others go to learn about democracy. In Kyrgyzstan, DW Akademie co-organized a media democracy camp on politics and the role of the media. 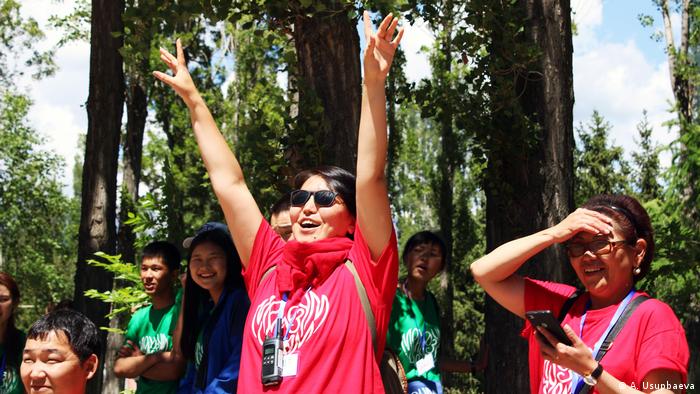 Fun and learning are not mutually exclusive! Trainer Bermet Abdykadyrova and young participants in the Media Democracy Camp.

"The camp has changed my way of thinking," said Arina Taran, a student from the Chui area. "I've learned so much - how elections are held, for example, or how to design an election platform. I'm more attentive and critical now, and I've learned how to consume media. I also now know that I want to become a lawyer."

The message: media are part of democracy 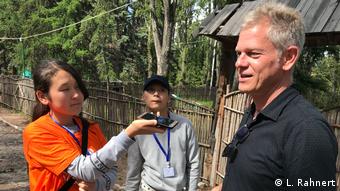 The young people experienced how difficult it is to conduct a good interview.

While other children might have spent their holidays by the seaside or in the mountains with their parents, 60 students aged between 15 and 17 met at Issyk-Kul Lake in northern Kyrgyzstan to take part in the Media Democracy Camp. The IFES (International Foundation for Electoral Systems) has been organizing these camps in Kyrgyzstan for the last twelve years with support from USAID. For the first time, DW Akademie, together with its project partner Media Support Center, were also on site.

The trainers gave the 60 young participants new tasks every day to do in groups. They were asked to work on topics such as fake news and media consumption, for example, or to put together a newspaper or TV report. They also learned about the political separation of powers and their purpose, or how to build a media corner at school. 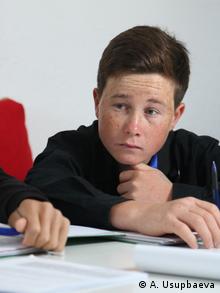 Ninth grader Anatoli Razgonjaev has learned a lot in the camp – and made new friends.

"This was the first time we included media activities," said trainer Bermet Abdykadyrova. "Participants enjoyed learning about the work journalists do. They didn't realize how much time and energy it can take or how difficult it can be to get information from interviewees, but they also discovered that it's an incredibly interesting profession. I found it important to discuss Internet safety with them so that they can now think about how to protect their personal data," he said.

One of the most exciting events was the staged presidential election. Each team nominated a candidate and held political discussions on the evening prior to the election. The excitement was palpable on the day itself. Starting early in the morning, the teams worked on election programs and campaigned for their candidates throughout the day. Some tried to buy votes from the other teams – something that does in fact happen during real elections. 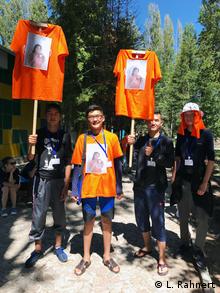 Election campaign in the Media Democracy Camp. The young people did everything themselves: from the election posters to the program.

The three candidates debated publicly and answered critical questions. What will you do to make the camp cleaner? they were asked. What needs to be done to get warm food on the tables? How are you going to make sure everyone's doing their job? Some took on the role of journalists reporting on the election.

Lydia Rahnert, DW Akademie's country manager for Kyrgyzstan, and Michael Karhausen, head of DW Akademie's Asia & Europe divisions, visited the camp on election day, taking on the role of international election observers. That evening, they oversaw an election that included all the important components: voter registration, voting booths and a real electronic ballot box, provided by the Central Election Commission in Bishkek  – together with staff who explained how it worked. 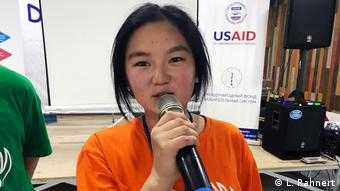 In the end, Zhasmina Asanbaeva, who led by almost six votes, was elected camp president.

"I came to the camp to learn something new," said Anatoli Razgonjaev, a ninth grade student from the village of Abdyldaevo in the Chui region. "And I've succeeded. I've learned how to conduct interviews, for example. But above all, I have made many new friends from different regions of the country."

With its projects in Kyrgyzstan, DW Akademie focuses on fostering community media and helping journalists along the border of Kyrgyzstan and Tajikistan. (12.06.2018)

The Suusamyr valley is a high steppe plateau in Kyrgyzstan where you feel like the stars are in reach. Eight-year-old Aidatka lives there and dreams of becoming a cosmonaut. She got the idea on the radio. (05.07.2018)

Journalists and citizens living along the border between Kyrgyzstan and Tajikistan have a lot in common, food culture for instance. While cooking together, they discuss the issues in the border region. (02.07.2018)