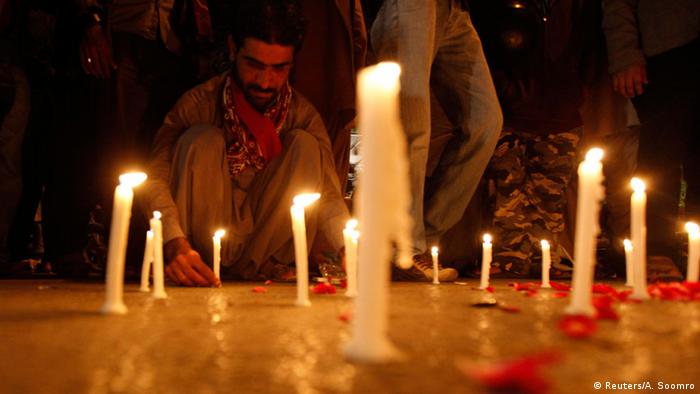 A man lights candles to mourn the victims from the Army Public School in Peshawar, which was attack by Taliban gunmen, in Karachi, December 16, 2014.

Everyone in Pakistan knows where they were on December 16, 2014 when they heard the news. Journalist Umar Khan’s* story goes like this: It was his day off, and he was having a lazy morning when his editor called him and said there was an important story to cover. The Army Public School in Peshawar was under attack.

Bomb blasts and terrorist attacks had become a routine matter by then, particularly in Khyber-Pakhtunkhwa (K-P), a region that borders Afghanistan and where the impact of the US-led ‘War on Terror’ has been felt most keenly. Since 2001, an estimated 80,000 people have been killed in incidents of terrorism by different armed groups that have left no province of the country untouched.

Khan is a quiet man who comes across as someone who keeps to himself. In his late thirties now, he wears a thin mustache and glasses so thick that one can tell he wouldn’t be able to see without them. On that December day in 2014, he reminded his editor it was his only day off that week. He was told it didn’t matter. He had to go.

Khan had been covering unrest in Peshawar since the mid-2000s, when the capital and main urban center in K-P had become a hotbed of militancy. He had reported on the blast in a central market in 2004 where the intensity of the explosives was so high that some people are still listed as missing. And he was there on that Sunday morning in 2013 when two suicide bombers attacked All Saints Church during mass, leaving more than 100 people dead. He thought he had seen everything. But after all those years of covering conflict, nothing could prepare him for what he saw on the day the Army Public School was attacked.

"When I reached the hospital, the press was everywhere, and so were devastated parents looking for their children. Then I saw around 20 children in their uniforms lying on the floor. A teacher’s body was lying in the middle. It was as if I were in a classroom of dead students."

The attack left more than 144 school children dead. In the months afterward, Khan diligently visited families affected by the massacre, profiling one child after another and publishing daily stories on parents crushed by trauma. The emotional impact of it all has been more than he can express. Even today, he still sometimes struggles to walk into their homes when he follows up on that attack.

Khan has witnessed extreme violence, seen hundreds of dead bodies, some still identifiable as people, others not. During some of the city’s most difficult times he covered more than three terrorist attacks in the space of a week. Despite this, there has never been so much as a conversation around mental health in the newsroom.

"Who thinks about trauma here?" he asks.

In the years after 9/11, when terror attacks became nearly daily events in Pakistan, journalists there have been forced to operate like fearless heroes, live reporting terrorist attacks without any protective gear, while being made to zoom into suffering and bring out footage of wailing mothers, orphaned children and streets covered in blood. Pakistani television channels, competing with each other for exclusive content, would do whatever it takes. At times, this has meant showing the decapitated heads of suicide bombers on live television.

In a city like Peshawar, people have strong community ties, they know each other well. There came a time when everyone was affected by violence, whether it was losing someone they loved or at least knew closely, or walking around a city where sites of suicide attacks had become landmarks.

But while the changes in society as a result of the attacks were apparent, the toll it was taking on reporters was never recognized. "This is what made it most difficult for us, that none of these emotional challenges were ever acknowledged," he says. But Khan also adds it would have been unrealistic to expect editors to account for the trauma he was going through. The editorial staff were in the same boat, day after day producing pages with stories of mass violence, while struggling to make each incident matter to readers who were watching their country crumble.

"Before this conflict started, people in the newsroom would laugh and make jokes. But afterwards, it was a different place. There was an air of constant strain and stress in the newsroom. Nobody was in a normal situation."

Besides the constant reporting on militancy, Khan found himself emotionally battered by stories of daily crime. "I used to do a television show on crime stories and every other day there were stories about women being killed over family honor, women who were the victims of acid attacks, women being raped and sexually abused. Once there was a story of a woman who was thrown off the fourth floor by her husband after having been beaten badly. I don’t know how to get that out of my mind; it’s been years, but I still think about her."

In his 15 years of reporting, Khan has never had the opportunity to seek psychological help and so he has learned to deal with it in the best way he knows how: with a ready supply of antidepressants prescribed by a doctor friend. It has allowed him to get through the day, but repressed trauma has a way of showing up in the body. Khan talks about getting panic attacks and has had consistently high blood pressure, ranging on hypertension, for at least eight years.

"It’s impossible to see so many things in a day and not get affected," he says. "Many people here suffer from depression, but they won’t admit it. If you do say it out loud, people just think you’re crazy."

Khan believes journalists have a dire need for psychological counselling, but points towards the lack of mental health practitioners in Peshawar. "It’s not just that therapy is unaffordable for people, but also that there are too many people in need and too few practitioners. Even if you go see someone, they won’t have more than five or 10 minutes to give you before writing up a prescription," he says. "What I really want is to be admitted to the hospital for a month."

He mentions this several times during our conversation. He is not completely certain about how this desired hospitalization will help, but in his eyes, "there is no other way to be okay." The emotional turmoil has settled in too deep and he desperately wants to escape it. The pressure has been far too much for far too long.

"I no longer want to do this," he says. "I will leave soon. Enough of journalism."

But for all his colleagues covering traumatizing events, the challenge will remain.

Talking about a taboo