How close should we get? Media and conflict

DW Akademie’s publication collects stories from around the world exploring various roles media play with regard to conflict. 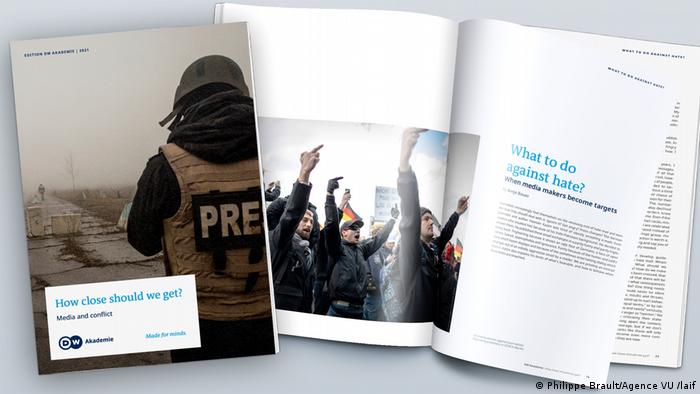 Empathetically, objectively, or aggressively: Media depict conflict in different ways. But their role is always an important one. Be it journalists, bloggers, YouTubers or citizen journalists – through their reports or posts, they all can either exacerbate conflict or contribute to more mutual understanding.

Those working in media face plenty of challenges when it comes to handling issues around conflict more sensitively. In some countries, these difficulties could include forced or unsolicited loyalty, a lack of information, or physical and psychological threats. In others, challenges could arise from prejudice fostered by excessive homogeneity in newsrooms, or a lack of consciousness for the limits of certain views.

In DW Akademie’s 'How close should we get. Media and conflict', authors from around the world approach the question of how media workers can cover conflict better. This includes reflections on how to cope with the deluge of hatred online and on how to deal with trauma.

Rather than academic, analytical texts, the publication is made up of thoughtfully written, carefully illustrated and often personal pieces. Readers are invited to reflect on the examples they encounter, and perhaps think differently about how media portray conflict.