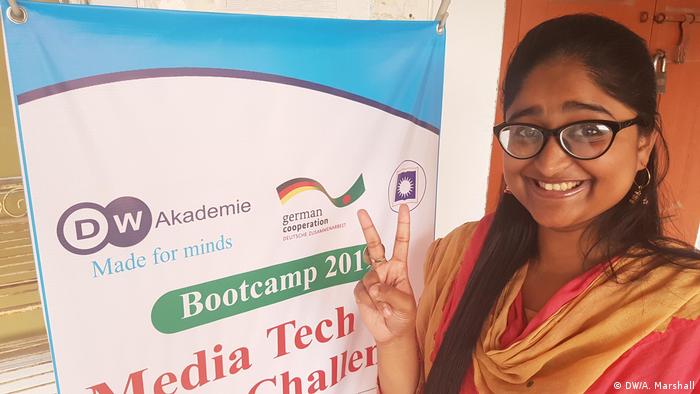 On the lookout for data-based and technology-supported applications: The Media Tech Challenge called for innovative solutions

Sexual assaults, stalking and acid attacks are threats that many women and girls in Bangladesh constantly face. According to the 2019 annual report of Odhikar, a human rights organization, there were more cases than in the previous year. In some cases, women or girls had died during the attacks or later committed suicide out of shame. 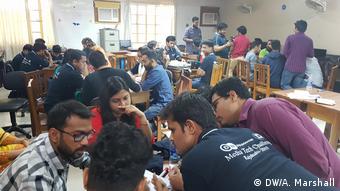 Working together as a team towards a goal: The DW-Akademie focuses on cooperation

"We were aware of the problem but were shocked when we realized the extent," said Abdullah Al Mamun, a computer science student at the University of Rajshahi in Bangladesh. He and his team developed an SOS bracelet for the Media Tech Challenge, a hackathon series run by DW Akademie. The team's wearable looks like a digital wristwatch and in an emergency, the wearer can press a button that then distributes one or more text messages via a GPS satellite. The watch works without an internet connection and that's important because in Bangladesh, those connections are often poor or non-existent.

The SOS messages are sent to a previously defined group of people such as family members, friends or the emergency number of the local police station. The geo-coordinates sent are then displayed on an online map. A website bundles this data with previously published information on sexual assaults.

"This makes dangerous places visible and creates an awareness of the dangers and the need for more protection," said Al Mamum. The SOS wristband needs some reworking before it is ready to go into production and would cost the equivalent of ten to 15 euros per piece. Al Mamum and his team presented their prototype at the Media Tech Challenge finals, held in the capital Dhaka.

The team had debated various issues while developing the prototype, such as whether the police should be informed in an emergency – in Bangladesh, the police are not always considered reliable or trustworthy – or whether the alarm could also be used against the victim. For all the teams taking part in the Media Tech Challenge, a key aspect was how to guarantee the protection of personal data.

Olga Kisselmann from DW's Team Innovations and the mentors Nur A Shawal Siddique and Biswajit Panday had supported the 35 participants over several months, addressing questions and technical problems that arose. Participants included journalism students and computer science students at the University of Rajshahi as well as media professionals from the Daily Star newspaper, the online media house Channel i and the radio station Radio Today. The ideas for apps, online platforms and websites developed by all six teams are aimed at processing information and making it available to the public. 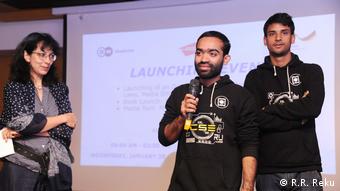 During the final of the Media Tech Challenge in Dhaka, the teams got a chance to present their concepts and answer questions from the audience

Several teams dealt with disinformation. In Bangladesh, false reports and disinformation often spread at breakneck speed via online portals, social networks, and messenger services. How, then, can they be exposed?

"Our two-stage prototype can verify large amounts of data within seconds using artificial intelligence," explained Hossain Mohammad Nazzar from the "Fake Busters" team. The algorithm first learns to recognize certain patterns in fake messages, such as the choice of words in headlines, texts, links or comments. The second stage (cross-validation) then focuses on aspects such as the seriousness of the author and the website where the text was first published. It also analyzes the graphics. Once checked, the reports are then put in an app and marked with a visual tag: True or not, right or wrong. This would not only help journalists in their research but could also help online users to better evaluate shared or published information. 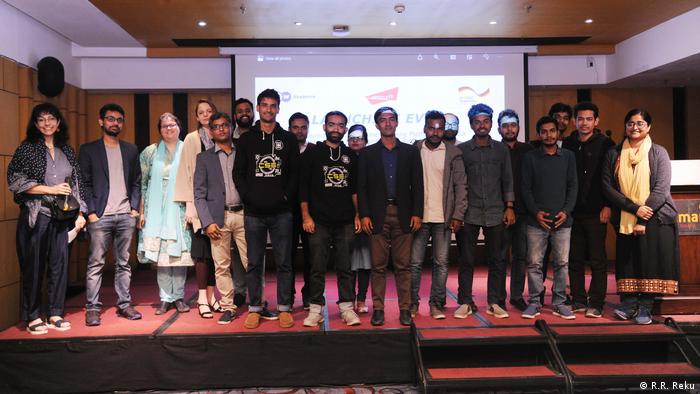 From prototype to production: The participants have learned a lot and now want to realize their ideas

Illegal waste dumps or contaminated wastewater were the focus of the "Spring to Summer" team made up of students and journalists from the Daily Star newspaper. The team developed the prototype for "WeFix Pollution Tracker," an app where people can report environmental pollution and journalists can collect and verify geo-coordinates and photos of environmental degradation or illegal dumping. "This creates a community with environmental awareness and that can generate social pressure," said journalist Zaid Kalam.

The next step for all the teams will be to find partners and investors who can help turn these innovative ideas into a reality.

This project was supported by the Federal Ministry for Economic Cooperation and Development (BMZ).

Journalism education in Bangladesh: From aspiring journalists to career professionals

This new study examines the effects of DW Akademie's efforts in improving journalism education in Bangladesh since 2014. (18.11.2019)

While Bangladesh is ranked as one of the most corrupt countries in the world, many who live there appear to be indifferent. A new radio program developed with DW Akademie support aims to change that. (14.10.2014)

Reporting the coronavirus at a Rohingya camp: "Saving lives is now the most important task"

A community radio station is working to inform the Rohingya in a refugee camp in Bangladesh about the coronavirus through reports over the loudspeaker and special broadcasts. The production conditions are a challenge. (08.04.2020)

How to organize a successful hackathon

There is no one-size-fits-all hackathon model that fits every group and/or topic. DW Akademie, however, offers some key aspects that can help determine whether an event will succeed or not. (24.09.2018)