As the world grapples with COVID-19, young media outlets are struggling more than ever. DW Akademie aims to assist startups with its new publication: 'From start to success — a handbook for digital media entrepreneurs'. 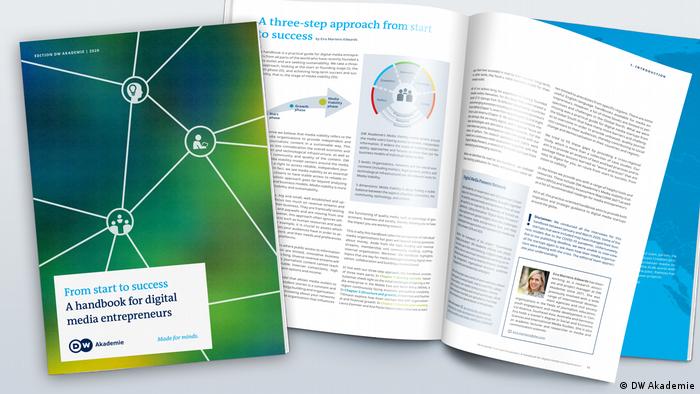 The last few months have been particularly tough for journalism — many media organizations have lost traditional revenue streams, newsrooms have made major cuts to staff, and in some cases media have had to close down entirely.

Even though we did not envision this global COVID-19 crisis at the time of production, this handbook might come just at the right time for media organizations all over the world fighting for survival and long-term success. It is available in English, Arabic and Spanish (free download below).

'From start to success' is a practical guide for digital media entrepreneurs, who have founded a media outlet and are seeking sustainability whilst staying true to quality journalism. This media viability handbook is unique in that it has been written by media startups themselves and presents the learnings of 21 digital pioneers including the Philippines' Rappler, Egypt's Mada Masr and Animal Politico in Mexico. The pages are filled with tips and information these media startups from 18 different countries wished they had when they first started out. It includes lessons learned, advice for successful growth and perhaps most importantly, how to sustain a startup's success.

The handbook presents a three-step approach: the start phase, growth phase and the media viability phase. It highlights an approach that focuses not only on revenue streams — an area that many startups put too much emphasis on — but aspects of the business such as human resources and audience engagement, which are crucial for achieving media viability.

Each chapter of the handbook explores one of the three steps in depth. In the first chapter, we hear from six startups in the Middle East and North Africa (MENA). They share their experiences of turning an idea into a reality and share the knowledge they learned during the start phase focusing on revenue streams, audience engagement, collaboration and donors' motives.

In chapter two, seven startups from the Asia region dive into structure and growth. There is a particular focus on diversifying revenue streams, staffing and internal organization, identifying a core mission and capitalizing on your strengths.

Chapter three features eight startups from Latin American countries who impart their knowledge on sustaining the success they have achieved. It rounds up the important lessons that digital media entrepreneurs should carry with them at all times. Community building, producing a quality product and involving the whole team in decision making processes are key.

DW Akademie guided 16 digital media start-ups from the Global South as they put their heads together to tackle media viability. Pauline Tillmann, project manager for the network, explains the challenges start-ups face.

Media Viability: New indicators show what is at stake

Advances in technology have disrupted the media ecosystem. There is no single way to overcome the economic challenges of running a media outlet, but there are patterns. What do successful media companies do differently?

Your team is not immune. How to minimize the impact of the Corona crisis on your media business

During the current pandemic, media outlets provide citizens with essential information. But, like other businesses, they face economic challenges. MDIF’s Harlan Mandel shares recommendations on how to handle the crisis.

To support the media start-ups network, DW Akademie created a series of webinars focussing on relevant topics that can help people working on media viability. You can find them all here.

From start to success – a handbook for digital media entrepreneurs | pdf