Here’s a look at what governments say, versus how internet shutdowns truly affect people – put together by Deniz Duru Aydin, a former Policy Fellow at Access Now, an international organization defending digital rights around the world.

What the government says: It's for "national security"

National security may be the most frequently cited justification for Internet shutdowns globally. It's also the broadest and most vague. In Pakistan, the government has made localized mobile network shutdowns justified on these grounds a standard practice, cutting people off from the network during Islamic holidays such as the day of Ashura, while citing concern about terrorist attacks. Orders for the shutdowns are meant to cover a relatively small area but it usually becomes necessary to "shut down a wider area than specified, to ensure there is no 'spillover' of service," according to the Institute for Human Rights and Business. This means that the majority of mobile Internet users in Pakistan are often affected. State authorities have also cut off the Internet for "security" during a wrestling event and Independence Day celebrations. In Turkey, during the coup d'etat attempt in July 2016, social media sites were throttled.

Shutdowns imposed in the name of "national security" have the opposite effect on the people cut off from communications platforms and online resources. People don't feel "secure" or safe when they can't figure out what's going on, can't get access to important news or reach emergency services and can't check in on their loved ones.

What the government says: It's to fight election "fraud" or stop the spread of "misinformation"

Shutting down the Internet or otherwise controlling the free flow of information online during an election period is a profound violation of human rights and a threat to democratic processes and government legitimacy. 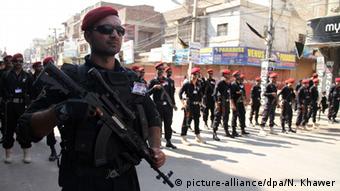 Pakistani security forces escort a mourning procession of Shiite Muslims in Hyderabad, Pakistan, in October 2015. Mobile phone and internet services were switched off

When the government ordered a disruption in Iran during the 2009 elections, it convinced a small group of activists and technologists to found our organization, Access Now. Sadly, Iran is far from alone in this practice. In 2010, Myanmar repeatedly shut down the Internet in the months surrounding its first elections in 20 years. In October 2015 in India, the government used local elections to justify a day-long shutdown in Garo Hills region.

Worryingly, there has been a series of shutdowns during or around elections over the past two years in countries in East and West  Africa, with governments disrupting the Internet, cutting access to social media, or carrying out full blackouts in Chad, Togo, the DRC, Congo-Brazzaville, and Uganda. Citizens are fighting back. In Uganda, when the government blocked Facebook, Twitter, and WhatsApp on election day, people circumvented the blocks using VPNs and other circumvention technologies, making the government's crackdown on free expression less effective. Yet as a result, we estimate that the mobile banking sector — a popular form of exchanging money — lost $23 million (21.1 million euro) per day over a weekend.

Civil society won a hugely important victory when the president of Ghana told voters that the government has no intention of shutting down social media on election day, slated for 6 December 2016, even though the police had been openly considering it.

What the government says: It's to keep citizens "safe" or "restore order" 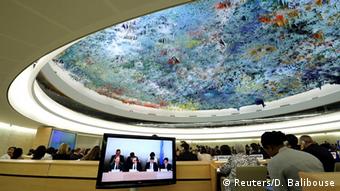 Governments that want to quell dissent or stop protests use Internet shutdowns as an extreme form of censorship, often while claiming that they are working to restore order or keep people safe. Many governments did not learn from Egypt's experience in 2011, when its Internet blackout drove more people into the streets. Countries that have used shutdowns to control information during protests include Bahrain, Cameroon, Chad, Democratic Republic of Congo, India, Iran, Kazakhstan, Libya, Mali,  Myanmar, Sudan, Syria, Uganda, the United States and Venezuela. From A to Z, these countries are blocking services or conducting full network shutdowns, with rationales such as "stopping the rumors" (in India) to the classic "ensuring public safety."

A violent protest might theoretically justify extraordinary security measures but imposing Internet blackouts when people are protesting doesn't increase safety. It stops important information from reaching citizens — like how to find areas of safety or contact emergency services. It also prevents people from documenting human rights violations such as the disproportionate use of force by the police or military.

What the government says: It's to stop cheating on exams

An increasingly popular form of shutdown is one aimed at stopping students from cheating on exams. The first one that we're aware of happened two years ago in Uzbekistan during university entrance exams. At the time, the government did not admit that school exams were the reason for the shutdown, instead citing "urgent maintenance work on telecommunications networks."

After that, in June 2015, Iraq shut down the Internet for national exams and did so again one year later. This year, a full-blown trend emerged, with governments in India, Algeria, Ethiopia and Iraq each turning off communications networks during national exams.

This type of shutdown is a clearly disproportionate practice, impacting the free expression rights of millions of people to stop cheating by a few students — who might nevertheless develop other ways to cheat.

What the government says: It's to keep the dignitaries safe. 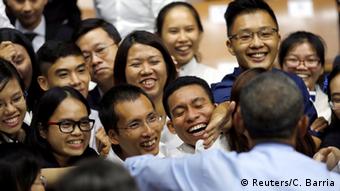 The Vietnamese government blocked Facebook when US President Obama visited

Governments sometimes see a national security risk when government officials or foreign political leaders are visiting, and use the risk to justify shutting down the Internet. One of the earliest examples we're aware of took place three years ago in Pakistan when the government ordered a disruption during the visit of the Chinese Premier Li Keqiang.

More recently, authorities in the Indian state of Jammu and Kashmir blocked mobile Internet during Prime Minister Modi's visit to the Kashmir Valley. The people of Kashmir have experienced more shutdowns than those living in any other state in India but this may have been the first time justification was tied to a high-profile visitor.

Similarly, in the Philippines, the only shutdown we recorded took place last year during a visit by Pope Francis. It was supposed to be a targeted disruption of the area along the Pope's travel route but other areas were impacted to prevent spillover of signals. And in May, the Vietnamese government blocked Facebook when US President Obama visited.

Disruptions like these interfere with our right to receive and impart information, a right that is not suspended when dignitaries visit. And the rationale is questionable. In Vietnam, for instance, did the government impose a shutdown for "national security" or to censor news about the protests that were happening at the time?

How we can fight back?

As these examples show, countries use a variety of rationales for Internet shutdowns and depend upon different laws to legally justify those reasons. In some cases, what makes the difference for whether an Internet shutdown will be implemented is the licensing requirements between a government and a telecommunications company. These requirements can create "excessive intermediary liability," where a company is compelled to comply with shutdown orders even when they are extralegal. Yet push-back remains possible, through industry-led coalitions like the Global Network Initiative and by appealing to national parliaments and other institutions.

A key victory on the international front came when the United Nations passed a resolution in June 2016 that specifically condemns Internet shutdowns. This demonstrates the growing global consensus that Internet shutdowns are a human rights violation that cannot be justified even in times of conflict. It is now up to us to help establish new norms and laws that disallow shutdowns regardless of rationale, with the support of civil society, industry, academia and individual Internet users from all around the world.

More than 100 organizations are already backing Access Now's #KeepItOn campaign to fight Internet shutdowns. You can find out more about the campaign here and if you personally experience a shutdown or hear about one, you can report it by emailing Access Now at shutdowns@accessnow.org.

This article was originally published on 6 October 2016 by Access Now under the Creative Commons license, CC BY. This version has been lightly adapted to bring it in line with our publishing guidelines.