Feature phone and smartphone battle it out in Africa

Mobile phone use has been skyrocketing in Africa - the number of handsets is set to reach a billion next year. Most people still use so-called feature phones but the rival smartphone is expected to catch up before long. 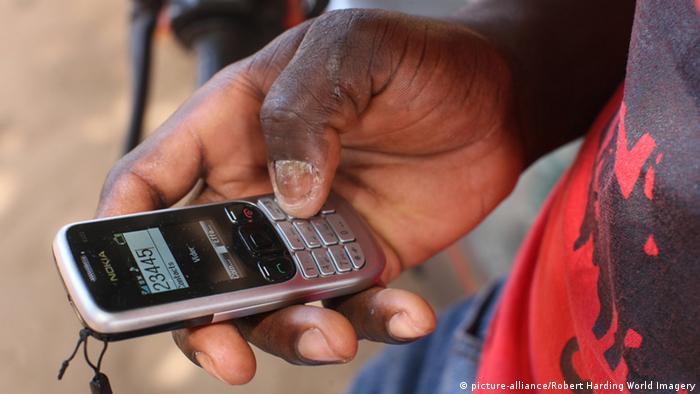 Feature phones are lower-cost devices with much more limited functionality than their smart rivals.

Today, mobile phones are as common in some parts of Africa as they are in the United States or Europe. Just eight percent of the population of Ghana owned a mobile phone in 2002. Last year, that figure reached 83 percent.

“The mobile phone screen is the main screen here, often the only screen and definitely the first screen consumers engage with,” Derrick Kotze, CEO of mLab Southern Africa, a start-up accelerator for mobile developers in South Africa, told #mediadev.

“So as the continent's economies and access keep growing, mobile is going to be a very important place for investment and innovation,” Kotze said.

You might imagine that the lucrative mobile phone market in Africa would be dominated by smartphones, like the iPhone or Samsung handset. Instead, feature phones are way ahead.

A study recently published by the Pew Research Center looked at mobile phone use in seven sub-Saharan African nations. Researchers found that, on average, 15 percent of people living in those countries had a smartphone, while 65 percent still used a feature phone. 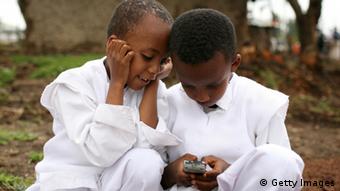 Some terminology clarification is in order. A smartphone is powered by an operating system such as Android, Apple’s iOS, Windows Mobile, etc. It acts like a mini, multi-tasking computer and allows users to surf the Internet and download a variety of apps, among other things.

Feature phones (some call them 'dumbphones') are generally lower-cost devices with much more limited functionality than their smart rivals. But feature phones are getting smarter all the time as they gain extra features, like social media apps. Nokia, for example, introduced a line of amped-up feature phones back in 2011. Phones in the Asha series were pretty smart.

There are several important reasons for feature phones being the clear leaders in Africa:

Function - The Pew study found that most people in sub-Saharan Africa used their phones for text messaging and taking photos or videos – functions that a feature phone can handle just fine. Feature phones also work well with popular services like M-Pesa, which allows people to transfer cash via their phones; and mPedigree, where you can check to see if medicine you have bought is authentic or counterfeit.

'Smart' but not cheap - While the prices for smartphones are falling fast, they’re still unaffordable to many on the continent. About a third of Africans live on less than $1 a day, which means even if a smartphone falls to $50, that’s 50 days of wages. Data and airtime costs are also a major hurdle. High data costs are thought to be a main reason the digital divide is proving so difficult to narrow.

Electricity costs - Most smartphones need a charge every day or maybe every second day. For those living in areas with limited access to an affordable, reliable electricity supply, that’s a deal breaker. Feature phones stay charged longer. Until a smartphone can go a week without a charge, people will still buy feature phones, said Jeremy George, VP for Africa at biNu, a social networking platform for feature phones and low-end smartphones.

Network coverage - Network coverage in Africa is still patchy in many areas. While smartphones’ potential for bringing educational opportunities to rural Africans has been much talked about, it’s impossible to stream an instructional video on a smartphone if you don’t even have a strong enough signal to make a phone call.

There's no doubt that sales of smartphones are rising as strong competition brings prices down. Samsung’s lower-cost phones, like the Galaxy Pocket, have proven popular in Africa and Microsoft and LG are rolling out new low- and mid-range smartphones this year. Now, a surge in Chinese players like Huawei, Techno, Xtouch and ZTE are bringing even more smartphones in reach of more people.

“The growth will be further driven by the increasing number of devices that cost less than $50 that are expected to enter the market over the coming year,” said Swedish communication tech company Ericsson’s 2014 Mobility Report.

Not if, but when

Many analysts say it’s only a matter of time before smartphones are in the majority in Africa. Some point to the fact that, in 2013, India's smartphone market grew by nearly 230 percent.

At the end of 2012, there were between 70 and 80 million smartphones in Africa, according to UK research firm Informa Telecoms & Media. That should hit about 412 million by 2018, the researchers say.

Nigeria-based Bankole Oluwafemi, who writes for TechCabal, told #mediadev that everyone will soon be able to afford a smartphone.

“While it's true that the richer experiences available on smartphones are not accessible to the still huge feature phone demographic, it would be a mistake in 2015 to continue to persist in a feature phone mindset,” he said.

Nic Haralambous, a speaker and writer on tech issues from South Africa, agrees: “Don’t be misled and think the smartphone isn’t coming, just not as fast as some might think.”

Although mobile phone ownership is booming, women in developing countries are still less likely to own a mobile. A new report highlights some strategies for connecting women. (18.05.2015)