DW Akademie's activities in Moldova focus on media and information literacy, and on the qualification of young journalists and instructors. 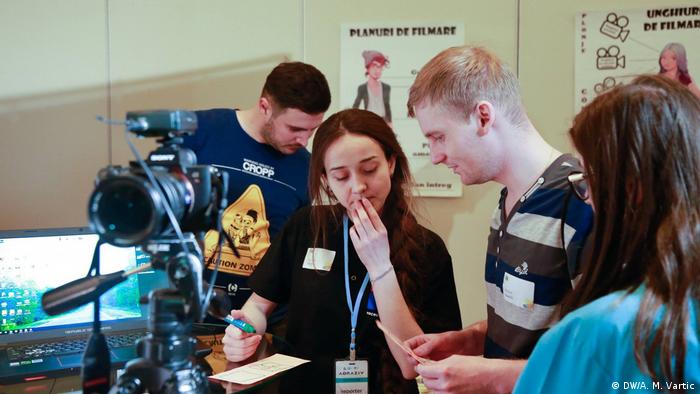 Moldova has almost unrestricted freedom of the media and expression and access to digital technology. However, the good digital infrastructure is also conducive to spreading propaganda and misinformation both at home and abroad.

The country's media landscape is relatively large compared to its population size and economic power. The media is financed mainly by oligarchs, and reports are slanted towards the interests of the owners rather than the information needs of the public. Russia's influence on the media also continues to be a major problem.

This especially affects people in the separatist region of Transnistria and in the Russian-speaking provinces. Particularly young people lack the skills for critically assessing propaganda and misinformation often spread via popular programs or social media.

Children and youth are the most active in terms of the digital sphere but at the same time one of the country's most vulnerable groups. Although they quickly learn how to deal with social media, they tend to consume media rather casually and as a result are susceptible to various associated risks including hate speech, cybermobbing, propaganda and group pressure.

In response, DW Akademie and partners are offering young people school workshops and media camps to learn how to critically assess media content and to produce their own reports. DW Akademie is also supporting two Romanian language and one Russian language children's editorial office in producing TV youth programs that are broadcast nationwide via the public broadcaster TRM and the Moldovan association for local stations, Canal Regional.

School teachers and university lecturers also need stronger media and teaching skills for preparing young generations for life in the digital age. As a result, teachers and lecturers are now receiving additional training and developing new modules and participatory teaching material so that they can pass on media skills to students ranging from elementary schools to universities.

DW Akademie organizes "hackathons" around the world for its media development projects. Yulia Alexseeva offers some key do's and don'ts for organizers. (24.09.2018)

For almost two years DW Akademie production consultant Martin Nowak provided support to Teleradio Moldova during a programming overhaul. He kept a journal on the final hectic days preceding the launch of a new TV format. (14.10.2014)

Republic of Moldova: Media and Information Literacy in the classroom

In Moldova, the State Pedagogical Uniersity "Ion Creangă", together with DW Akademie, is training school teachers throughout the country in Media Information and Literacy.