In Lebanon, DW Akademie supports platforms for dialogue between different social groups, and especially for refugees and young people. 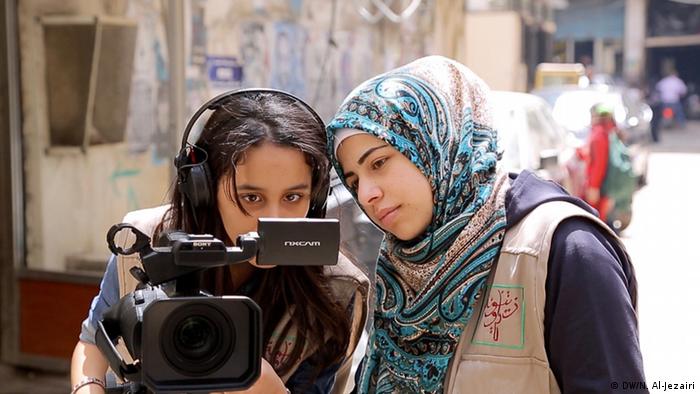 Lebanon's media laws are seen as relatively liberal, especially when compared to those of neighboring countries. At the same time, they also reflect the social divisions along numerous religious lines.

The media serve mainly as a mouthpiece for individual political and religious parties and for spreading propaganda and hate. The situation is exacerbated by interconfessional and political tensions. At the same time, the approximately one million Syrian refugees who have sought shelter in this small country are barely represented in the media.

Working in the shadow of the Syrian conflict, journalists are repeatedly subject to threats and violence. Social media networks are dominated by aggressive language and cyberbullying – the underside of global communication and an ideal breeding ground for real-world violence. Extremist ideologies have found a platform here that is largely unfettered by social constraints. Nevertheless, a strong civil society can also use blogs and social media to make its own voice heard.

DW Akademie's projects in Lebanon include the development of platforms for dialogue and exchange between different social groups, and especially for young people and refugees. We provide expertise for ARCPA/AL-JANA, a Lebanese non-governmental organization (NGO), which since 2014 has continued to develop the community platform Campji that lends refugees a voice.

DW Akademie is also supporting a viable digital media sector in the region. Together with the Lebanese NGO Maharat Foundation, it has established the Digital Media Viability Lab with an aim to strengthen innovative media in the Arab world.

DW Akademie also works with the Maharat Foundation in training media consultants from Morocco, Tunisia, Egypt, Jordan, Iraq and Lebanon to enable them to support independent media – usually digital media – initiatives in developing viable business models. Workshops on high-quality journalism and international conferences complement the activities. DW Akademie is also working with the American University Beirut and other journalism institutes in the region in developing and testing prototypes for a training program on conflict-sensitive digital journalism.

In a project funded by the European Union, DW Akademie together with the Jesus and Mary School, the NGO Permanent Peace Movement and the Media and Digital Literacy Academy of Beirut (MDLAB) have strengthened media and information literacy among school students and young adults in Lebanon. The project focused on teaching young people how to detect fake news on the Internet and respond in a responsible manner. The partners developed materials and programs to foster critical media consumption. The project was completed in March 2019.

Lebanon: Fact-checking during the corona crisis

In Lebanon, the Maharat Foundation has launched the fact-checking website “Fact-o-meter" with an aim to analyze fake news and provide the public with reliable and objective information . (07.05.2020)

Lebanon is home to a diverse media landscape - but digital media is still developing. Yet, politicians own most of the media outlets and the number of people arrested for exercising their freedom of speech has spiked. (07.05.2019)

DW Akademie promotes media and information literacy in Lebanon. "MIL 4 Peace in Lebanon" has been designed to help young people learn how to critically analyze media content and to develop their own projects. (08.01.2018)

Human-centered design is emerging as a new tool in development. Consultants working on a media project for young people in Shatila camp in Lebanon describe how they used the method to understand refugees' needs. (12.04.2016)

Young refugees at the Shatila refugee camp in southern Beirut are learning journalism skills. This is part of a new project to develop an online platform where youths can exchange information and ideas. (23.09.2016)