Capturing conflict: Photography and its effects 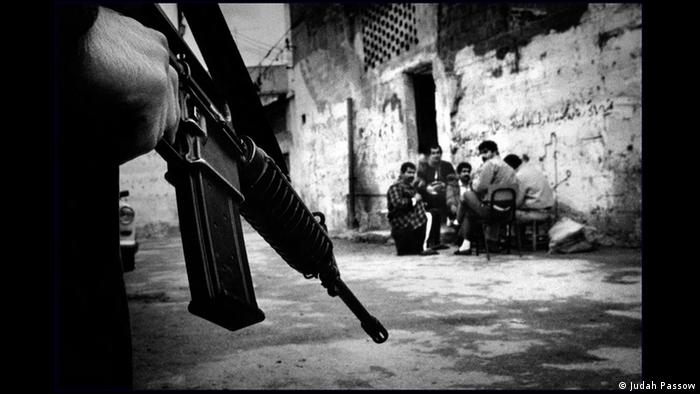 An Israeli patrol, ready to search the house of a Palestinian Fatah member.

Is it true that a picture is worth a thousand words, as the saying goes? Not always, but very often. We live in a visual age. Pictures — whether moving or still — can do a lot of good, but also a lot of harm. There are those images that evoke pity in the viewer — like that of the naked child fleeing towards the photographer after a napalm attack in Vietnam in 1972. There are those that are intended to mislead, like the countless manipulated images taken out of context, which are often used, especially in armed conflicts, to demonstrate supposed victories or defeats. And there are pictures that demoralize, brutalize and traumatize the viewer. Especially in conflicts, therefore, pictures have a special significance. They can intensify conflicts, but they can also stimulate reflection and compassion. Photojournalists and cameramen therefore bear as much responsibility as writers. DW Akademie asked Judah Passow what he aims for with his pictures and what he does not depict and why.

What do I want to achieve with my photographs? By Judah Passow

For my photographs to have meaning, to have a voice that speaks with power and authenticity, I must first understand the issues driving the conflict I’m covering. This understanding will allow me to interpret the conflict with intelligence and sensitivity by seeing beyond the surface of the moment and recognizing the full, nuanced range of emotions fueling the story. This means doing research before I start photographing, and then constantly talking to people on the ground once I start working, so that I can make decisions based on up-to-date information.

The photograph of the seven-year-old Indian boy breaking stones in a quarry outside of New Delhi is from a story about a particularly vicious social conflict. It’s about impoverished families in India who sell their children into bonded labor as a way of raising money. The practice is both illegal and widespread. The children work for years at menial jobs in dangerous conditions to pay back their employer the money their parents received. Some children grow into adulthood trapped in this system. Others wait patiently for the right moment and then try to escape. It’s a brutal, medieval practice which India hasn’t had much success in ending. 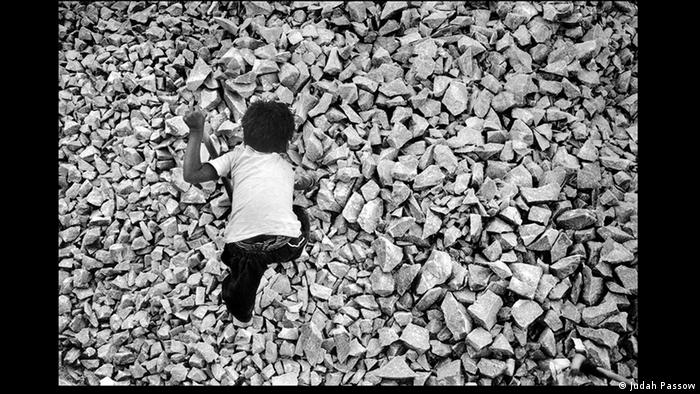 For several weeks before leaving on this magazine assignment, I read as much as I could find around the bonded labor issue. There were several detailed reports on the subject prepared by charities and NGOs which gave me a clear sense of the kinds of photographs I was looking for, and where I needed to go to find them. From some of these organizations, I received the names of people in New Delhi who were involved in the movement to stamp out this practice. By contacting them, I was able to arrange background briefings with local social workers, and visits to the homes of families who had sold their children, as well as the quarries, factories and markets where these children were working.

Another critically important element in photographing any type of conflict is trust. The kind of intimacy that gives a photograph its real power can only come once a certain level of trust has been developed between the photographer and the people being photographed. That trust has to be earned, and it is largely a function of the amount of time you spend getting to know each other. Time, to use a darkroom analogy, is the developer that gradually draws out and reveals the mutual empathy and respect that form the bond on which trust is based. This developing process can take days or even weeks, depending on the complexity of the story and the degree of hostility you initially encounter. But once that trust has been established, you find that people take you into their confidence and into their lives. At this point, you discover that your photographs begin to take on depth, drama, and emotional tones.

These kinds of experiences can’t possibly leave you unaffected. Your own emotional response to a situation is an essential component in a photograph of any importance. Photographer Bruce Davidson once observed about his own work: "My pictures aren’t so much about telling a story, as they are about my relationship to the story."

What is important when I photograph a conflict?

My photographs look at conflict from the inside. It's important for me to understand what the consequences of a conflict are for those people whom history seems to be treating with indifference. My intention has always been to take photographs which make it clear that neither side in a conflict has a monopoly on suffering, that every conflict by its very nature reaches a point where all it is achieving is inflicting pain on everyone involved. 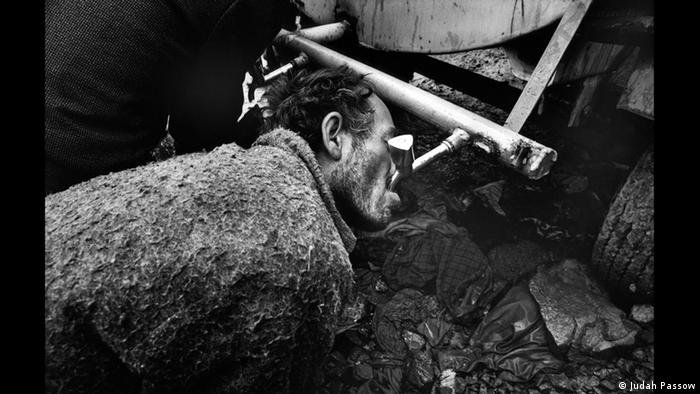 The photograph of the Kurdish refugee (on the right) is an example of what I want to achieve with my work. Taken during the first Gulf War in 1991, this man fled from his home in Iraq as Saddam Hussein’s army pushed north to attack the country’s Kurdish population. He walked over the Zagros mountains into Turkey where he joined 200,000 other Iraqi Kurds at a refugee camp in Ishikveren. I photographed him minutes after he arrived at the camp. Exhausted by the journey, wearing a dirt-caked sheepskin coat, he bends down to bring his parched lips to the tap on a portable water tank for a drink. He’s been reduced to humiliating animal-like behavior in order to survive. This photograph addresses an aspect of the story about the Gulf War that I personally found most compelling: how the conflict de-humanizes the voiceless.

Phillip Graham, when he was publisher of the Washington Post, famously said that "journalism is the rough draft of history." Those of us, photographers and writers, who gather news for a living, regard Graham’s observation as the guiding principle by which we pursue our craft. We are witnesses. We provide the hard documentary evidence which future generations will use to judge the accomplishments and failings of our turbulent times. We are driven by the hope that we will all ultimately learn from our mistakes, and that our children will not be condemned to repeat them. It’s the photojournalist’s responsibility to show what those mistakes are, and who is accountable for them, so that no one can defend their ignorance by saying "I didn’t know."

Conflict zones are places where the young are robbed of their childhood and the elderly stripped of their dignity. Where people glorify their past, curse their present, and have difficulty imagining a future. Photographing in these fraught situations demands that a photographer bring passion and commitment to using the camera as a tool for asking often uncomfortable questions in the search for truth.

What not to show

Sometimes what you don’t show in a photograph can actually have more impact than what you do. Photojournalism can be used to deliver both art and information, and covering a conflict presents us with both an opportunity and a challenge in this regard. 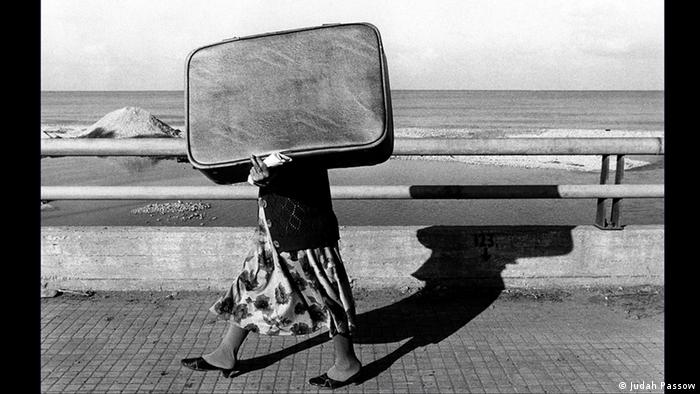 The photograph  of a Palestinian woman crossing the Awali River bridge into Southern Lebanon as she flees the fighting in Beirut, is a case in point. The Lebanese capital was a particularly fierce battleground in 1983, pounded by air strikes, artillery exchanges, tank battles and intense street fighting that made life there a nightmare. Two kinds of people lived in the city — those that could get out, and those that couldn't. This image is a way of addressing one of the central consequences of that brutal conflict — people fleeing their homes in the war-torn city — in a dignified and creative way. In marked contrast to those one-dimensional photographs of bodies lying in the street and buildings reduced to rubble, this image draws together elements of journalistic information, formal rules of photographic composition, and emotional subtlety to make a nuanced statement about the conse- quences of conflict, without showing blood.

In our world of 24-hour news cycles and media-driven desensitized emotions, much of the photography of the death and destruction in conflict zones tends to appeal mostly to the voyeuristic. These photographs have limited journalistic value beyond their statement of fact, and in many cases raise serious ethical questions about personal dignity and emotional sensitivity. By making a conscious decision not to focus on the raw barbarism that drives many conflicts, and look instead for ways to frame a more sophisticated photograph, we can help resensitize society and perhaps curb its appetite for brutality.

Photojournalism has been described as the photography of ideas. The real challenge in photographing conflict lies in being able to capture the idea of the cruelty, the tragedy, and the futility of violence.