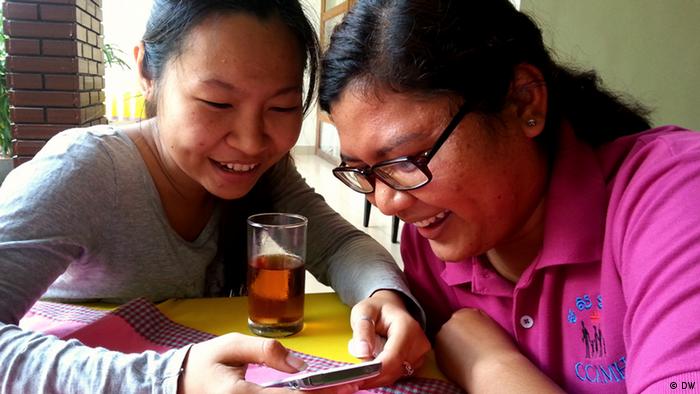 "Nothing about algorithms, please!" pleads Tim Pich Kessey at the start of the workshop, referring to the infamous algorithm that decides which posts show up on Facebook's newsfeed and, more importantly, which don't. Only those who really understand how the algorithm works and can use it to their advantage can drive user engagement on Facebook. While discussing the algorithms is unavoidable in a social media workshop, happily for Tim Pich Kessey, it's tackled later on. 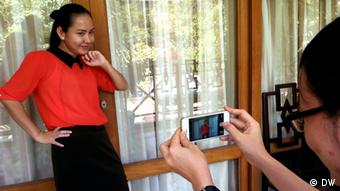 Reporting with a smart phone - a new way to increase participation

Instead, the first task at hand involves understanding the unique features of communicating on social networks. What makes for an enticing teaser, the short texts designed to arouse readers' curiosity so they click on the desired content? What role do photos play? How should unfriendly comments be dealt with?

The participants from the Ministry of Women's Affairs came with diverse experiences. “Some participants were very knowledgeable and understood how social media users tick,” says DW Akademie social media trainer, Julia Bayer. "We had to teach others basic skills on how to write for the internet."

As with all DW Akademie workshops, the goal here was to gain hands-on experience as quickly as possible, so the participants were soon writing Facebook posts and selecting pictures to go with them.

"Participants were pretty surprised that our training was so interactive and that they could try their hand at everything from the very beginning," says co-trainer, Miriam Klaussner. "We chose sexual harassment as our topic, which is a serious problem for women in Cambodia. They got straight into the issue, and were really on the ball, even in terms of the content." 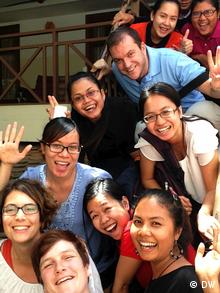 A professional looking Facebook page with compelling content is becoming increasingly important in Cambodia. According to Sabina Casagrande, DW Akademie country coordinator for Cambodia, the number of users on the social network has grown exponentially in recent years. Discussions about social or political topics are largely taking place in the internet, largely because it offers a space in which opinions can be expressed and discussed with relative freedom. So far the Cambodian government has not been restricting access to online media. As such, it is vital that employees at the Ministry of Women's Affairs can more effectively use Facebook's potential.

One key goal of DW Akademie's country strategy for Cambodia is to strengthen access to relevant information in particular for women. The level of violence in Cambodian society is high – a legacy of the traumatic events that unfolded during the war years and the brutal Khmer Rouge regime. Domestic and sexual violence against women is pervasive, and many women are unaware of their rights. The portrayal of women in mass media is often degrading, says Casagrande, and the media also plays down attacks on women.

"But now a new generation of men and women is emerging and we have to connect with them in the place they are looking for information – and that's on the internet," emphasizes Casagrande.

For Daniela Wiesler, head of DW Akademie media training, the training at the Ministry of Women's Affairs is a good example of how fruitful and important cooperation among the various DW Akademie divisions can be. "A diverse media landscape with independent journalists is immensely important for the democratic development of a country like Cambodia," Wiesler says. "But we also need government officers willing and able to provide the public with information on important issues." 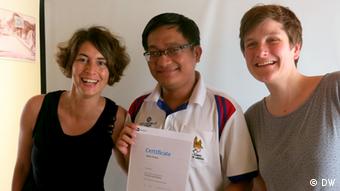 An analog certificate for a digital workshop

The government and the media in Cambodia don't currently enjoy a constructive working relationship. This strained relationship makes social media trainings such as these, which included ministry employees from various hierarchical levels, even more vital. It was also important to introduce various forms of internet communication, such as mobile reporting, where participants shot short videos on a specific topic on a smartphone, then directly uploaded them to the net.

Rodrigo Montero Cano, Gender and Communications Advisor for GIZ (Deutsche Gesellschaft für Internationale Zusammenarbeit) in Cambodia, cooperated with DW Akademie in organizing the workshop and deemed it a resounding success. "Participants left with a good understanding of the most important opportunities that online communication offers," Cano said. "In the future, they will be better equipped to assess their own strengths, and will also know what skills they need to improve."

By the end, Tim Pich Kessy also made her peace with Facebook's algorithm.
"I even learned to love it really – because I now understand how I can use it for my work."


In Cambodia, DW Akademie is endeavoring to improve access to information for youth and women and thus enable them to participate more fully in social and political debate. Communication on social media platforms plays a unique role in Cambodia's tightly controlled media landscape. The DW Akademie workshops, financed by the German Federal Ministry for Economic Cooperation and Development (BMZ), focus on strengthening media literacy and working towards a greater understanding of the internet not just as a medium of entertainment, but also as a source of information.

Cambodia is developing at a fast pace but accessing information can be a challenge. At the GMF, Penhleak Chan took part in a DW Akademie panel and explained how an online-platform is helping create transparency. (03.07.2014)