Reporting about migrant and refugee matters is often overshadowed by bias and national interest. Media experts from eight countries agreed on an action plan outlining steps for improving the situation. 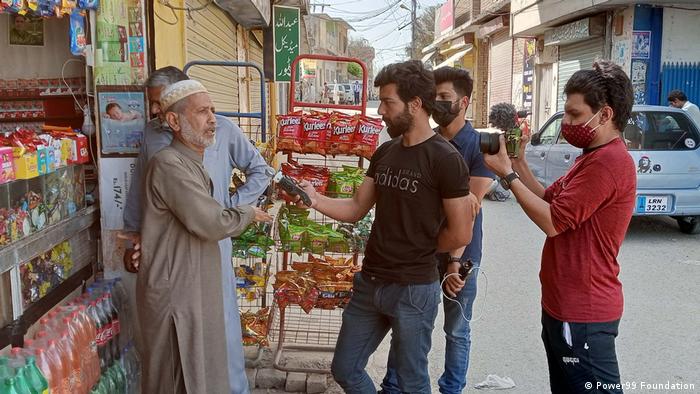 A citizen journalist interview in Pakistan

In spring 2022, more than 50 media professionals, activists, and experts from South Asia met online to develop a plan for improving journalistic reporting on migration and displacement in their respective countries. The region experiences large-scale migration flows, yet refugee and migration topics are often underreported or exclude the voices of those affected. As a result, the dominant narratives in reporting about these issues perpetuate stereotypes of migrants and refugees, thereby aggravating existing tensions and deepening polarization. Together, the participants developed concrete ideas for how journalists and media professionals can do better.

This process was part of a regional consultation organized by DW Akademie and the Calcutta Research Group with participation of the Centre for International Media Assistance (CIMA) and supported by the German Ministry for Economic Cooperation and Development (BMZ). The approach was based on prior regional consultations co-organized between DW Akademie and CIMA, and resulted in the development of the "South Asia Consultations: Media, Information, and Participation in Displacement and Migration Settings" action plan. The plan puts forth a series of proposals meant to foster greater regional collaboration for journalists and media professionals in South Asia.

Media and migration in South Asia: a fraught relationship

Reporting about refugee matters is often overshadowed by host countries' foreign policy interests and geopolitical situation. This can lead to biased and inaccurate accounts of the interests of refugees and other displaced people, which tend to undervalue or overlook their contributions to the host society. In some cases, news media are forced by repressive regimes to publish stories that toe the government line.

In addition, newsrooms facing financial constraints often prioritize reporting on other issues or encourage sensationalized stories because of the revenue this kind of reporting promises. Even regional media in South Asia often reproduce stereotypes painting refugees and migrants as outsiders, economic burdens, and criminals.

Thus, refugees themselves struggle to make their voices heard in mainstream media in the region. At the consultation, participants agreed that the most effective way to change the narrative is to create alternative spaces where refugees and migrants can tell their own stories through, for example, podcasts and talk shows. Social media also holds great promise in this regard, as does the training of refugees and migrants as citizen reporters.

Deliberations during the consultation also made clear that reporting on topics of migration and displacement face the same challenges as other underreported topics, like climate change. These problems include a lack of journalistic expertise, low interest in the topic, and policy environments that are not conducive to covering sensitive political topics.

Reporting on refugee matters requires specialized expertise that journalists often lack. Trauma-sensitive interviewing skills are crucial for reporters seeking to highlight the experiences of refugees. Similarly, since migration is a complex topic affected by regional events and legislation, reporters should develop the requisite knowledge to accurately contextualize information in their reporting.

As such, a key recommendation emerging from the consultation is to improve training for journalists and editors in the region. According to participants, training should include research and interview skills, media ethics, as well as information about relevant national and international legislation. Crucially, training should be made available in local languages and cover the broader regional context, in addition to country-specific issues.

As displacement and migration topics often touch on broader regional developments that are rarely covered in national media, the action plan also identifies an urgent need for more journalistic cooperation and networking across the region. To that end, participants called for the establishment of a regional network to enhance exchange and information sharing, including to policymakers. They propose setting up a database with information on regional stakeholders and journalistic training opportunities available in the region. Given linguistic barriers, the database should also include translations of relevant research into prevalent regional dialects to facilitate knowledge sharing.

Cross-sectoral collaboration is necessary for a regional network of this nature to function effectively. This should include collaborations between journalist unions and research and advocacy organizations working on media issues, but also between journalist groups and organizations working on refugee rights and labor rights. Collaborating with stakeholders across different fields will generate new knowledge, build solidarity across different communities, and strengthen regional advocacy efforts.

Participants concluded that there is an urgent need for action. Despite the diverse viewpoints on the main challenges facing the region, there was widespread agreement on the need for cross-regional exchange and mutual support. For this reason, the Calcutta Research Group, with support from DW Akademie, is currently engaging with partners in South Asia to build a vision and plan for supporting the establishment of a regional network—a key recommendation in the action plan.

This post originally appeared on the website of the Center for International Media Assistance (cima.ned.org) and is published here with permission. The Center for International Media Assistance (CIMA) is a think tank based in Washington, DC, that works to promote diverse and innovative media systems for an informed public around the world. You can follow CIMA on Twitter or like CIMA on Facebook.

The challenges of reporting on migrants and refugees in South Asia

Reporting on migrants and refugees in South Asia tends to stereotype their experiences and overlooks relations with host societies. DW Akademie brought together stakeholders to discuss reporting in migration settings.