"Women journalists are crucial to covering women's stories around the world"

DW journalist Jenipher Camino Gonzalez wrote one of the most read DW articles of 2020. For this year's International Women's Day, she shares what it means to be a woman in journalism. 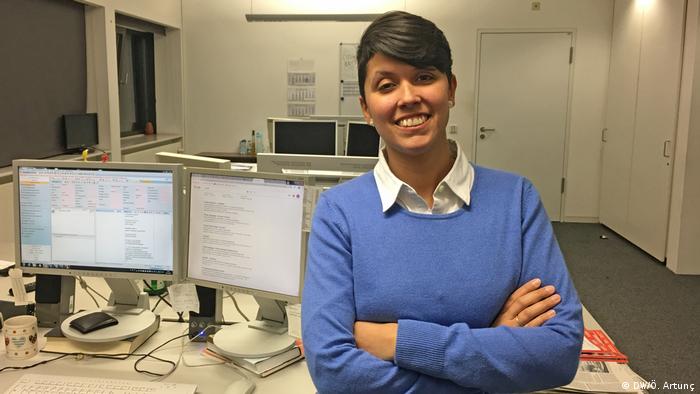 Venezuelan journalist Jenipher Camino Gonzalez, News and Current Affairs, was among the female DW journalists who had the biggest reach with their work last year. She co-wrote the article about the locust swarms in Pakistan and this article is one of the most visited articles in 2020

What is the best thing about being a woman in journalism?

I would say that one's lived experience and perspective as a woman, especially as a woman of color, is crucial to more accurately cover women's stories around the world. In particular, being a woman in journalism is most instrumental when tackling sensitive and difficult subjects in the news about sexual harassment or gender discrimination towards women.

What does International Women's Day mean to you?

International Women's Day is a day of remembrance for me: to commemorate the ongoing, long, and difficult struggle to ensure women achieve equal status in societies across the world. This day is also a reminder that while Western nations have achieved a lot, we are not quite there yet in terms of equal pay for equal work, representation in political and corporate leadership, among other inequities. It is a day to revisit what has been achieved and also look ahead at the work that remains to be done.

What is the most interesting story that you have worked on in your career?

The most interesting story I worked on was covering the opening of the female football hall of fame in Germany. The event, the interviews I conducted and the research I did for the story, gave me a window into how women in this country have struggled to carve a place for themselves in one of the most male-dominated spaces in society. What I found was that even when women are given the opportunity to play and when they use it to prove they can be the best in the world, they still have to fight for recognition, respect, and monetary investment, they still have to convince more and more people that their game is worth watching. It was bittersweet, but also a great example of why and how it takes so long for women to rise and thrive in male-dominated spaces.

What advice would you give to young women who want to pursue a career in journalism?

I would advise them to pursue a career in journalism without the fear of not being good enough. The so-called "impostor syndrome" is real and it affects women in particular. Unlike men, we are not socialized to believe that certain spaces belong to us, that we "deserve" a seat at the table, so many women doubt their own abilities, they second-guess their talent and let insecurity dampen their ambition. I would advise girls entering the field to believe in themselves, to find the balance between being self-critical and appreciating or having pride in their work.