"Using the knowledge I have gained"

It's exciting times for the Cambodian Chheng Niem, who has just successfully completed his master's in International Media Studies in Bonn. Now he hopes to help improve the media situation in his home country. 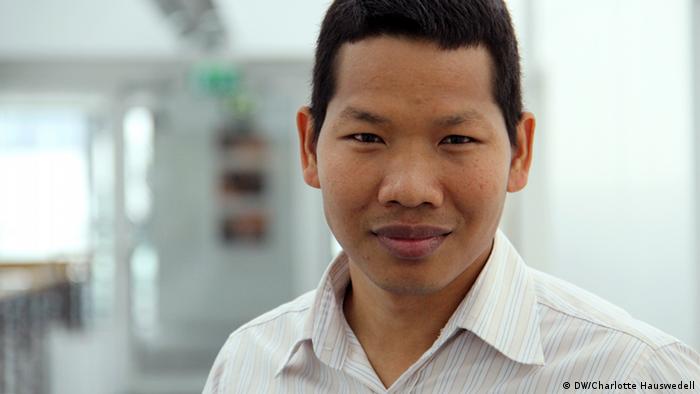 Niem is part of the third group to have graduated from DW Akademie's international master's program. In his thesis, Niem examined the influence of international broadcasters on Cambodia's independent radio stations.

Before coming to Germany, Niem, who has a Cambodian undergraduate degree in media management, worked for the Cambodian NGO "Youth for Peace". There he was involved in a project that supports Cambodians in coming to terms with their recent past. The project also promotes the peaceful coexistence of the younger generations with those who survived the Khmer Rouge dictatorship.

What did you originally expect from the International Media Studies program?
I assumed that when I finished the two year program, I would know all the tricks of the journalism trade. But rather than focusing just on practical journalism skills, the course took a much wider approach. It provided us with different perspectives on the media and gave us a broad overview of how the media functions.

What are your career plans now?
I'd like to apply the knowledge I've gained here and if possible, work in Cambodia for an institution seeking to improve the media situation there.

How do you see the current media situation in Cambodia?
I believe it's improving. The media industry is expanding quickly and although the government is still trying to restrict the media it's finding it difficult to do so. Things are changing. It used to be easy to appease readers or listeners but that's no longer the case. Many Cambodians now have access to alternative information and reports via the Internet or social media. This means they view their own media more critically and are more likely to question what they hear or read. Media consumers are no longer simply accepting the information being dished up to them.

How important do you think social media is in Cambodia?
It's extremely important because we don't really have a free press. There has been a substantial growth of social media and the Internet in the last three years but this is still predominantly limited to the large cities. In the rural areas, language barriers are a huge challenge, especially when it comes to using computers, the Internet and social media.