Trainees and Apprentices join together for TV magazine Calypso 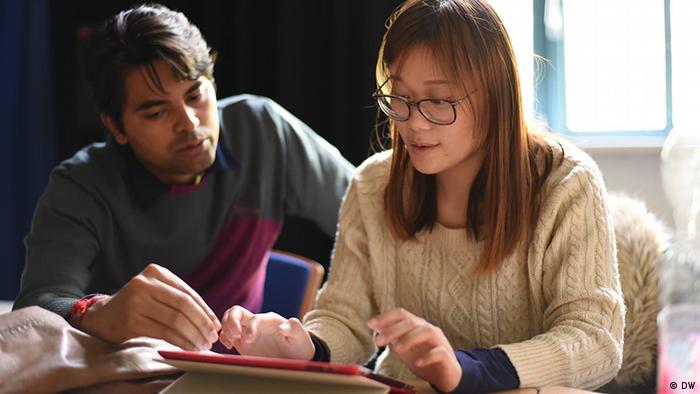 Quick, what pops into your head when you see the word "light"? Sun, shadow, darkness, lightbulbs? Maybe the beach? Maybe the fluorescence of an office?

How about blind football players, or actors with stage fright, or people with an allergy so severe they can't step out into daylight without experiencing pain.

These are just some of the topics the DW Trainees tackled during their three-week seminar putting together Calypso TV, during which time they not only learned the ins and outs of planning, storyboards, framing, filming, editing and living off of gummi bears for daily meals, but they also marked a milestone for DW Akademie: 2015 was the first year that the International Volontariat program produced Calypso in two languages.

The trainees this year come from hugely diverse professional backgrounds. Some have already worked in TV, some are just dipping their toes for the first time. German speakers and English speakers at all levels teamed up together to hunt through Bonn and Northrhein-Westphalia for stories about light.

Even from just the initial brainstorming stages, the Trainees quickly discovered the theme "Light" could bounce us, wave- and particle-like, in many different directions. Beyond the simple physics of light or how we experience it every day, the group examined the angles of what happens when someone gets too much light (allergies or skin cancer), what if people suddenly "see the light" (religious experiences), how is light manufactured, how is it manipulated?

Teams and themes were divvied up. Grand ideas were dreamt up. Phone calls were placed, plans were made, then sources canceled, or it rained while we were shooting, or a light installation we wanted to film was half-broken. You know, just like how television usually works.

Thanks to the incredible talents and hard work of the Media Design Apprentices, they were able to breath their way through every hiccup and push through all the late nights in Berlin. For many of them, it was the first time they had ever had the opportunity to see how TV shows are behind from behind the camera. Between the sheer amount of planning, the quick thinking on your feet, the sitting and waiting for something to render, they all experienced moments of great stress and great elation. 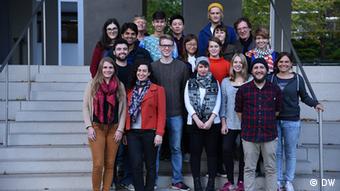 If the Trainees all learned anything, it's exactly how much work goes into producing every single minute of TV that we see here at Deutsche Welle. Despite the late nights, some incidents of messed up sound recordings, deleted files and complex workflows, the Trainees managed to produce two TV shows in the space of time usually allotted for one.

From the original brainstorming down to proofreading the final, bilingual inserts, the Trainees and the Apprentices got to experiment with their newly-learned skills in shooting, editing, and producing, and not to mention playing around with some fun new technology in the form of Go-Pros.

As they move into their next big project and further on in their careers, the lessons of Calypso - teamwork, clear heads, and keeping organized - will stick with them.