The rise and fall of public broadcasting in South Africa

After the fall of apartheid, South Africa's national broadcaster, the SABC, was transformed into a vibrant source of independent information. But things have since changed – and not for the better. 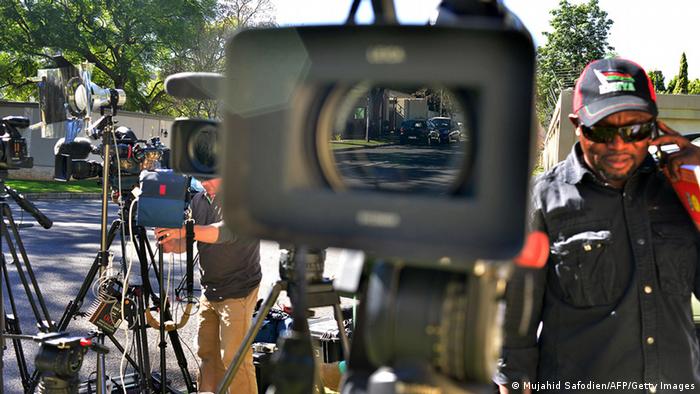 We really enjoyed them, for a while, the programs of the new South African Broadcasting Corporation (SABC) before and after South Africa's first democratic elections in 1994. They addressed the major issues in the lives and conversations of ordinary citizens and helped us see and understand what was happening in our country, on the African continent and in the wider world.

Under the leadership of men and women who not only understood but were deeply passionate about using the power of mass communication to transform our society, the public broadcaster delivered what it was supposed to: professional news bulletins, lively and controversial debates, socially relevant soap operas, crisp satire, investigative journalism, brilliant documentaries and quality entertainment – all featuring the best talent in journalism, showbiz and film production.

The SABC showed what public broadcasting can do for African democracies. We were proud of it – at least for a decade.

The need for change

Until 1990, when Nelson Mandela was released from prison and the ban on the African National Congress (ANC) was lifted, the SABC was a mighty propaganda tool wielded by the nationalist, racist white government.

In 1990, Nelson Mandela gives his first interviews after 27 years in prison

During the period preceding the 1994 election, activists from the Campaign for Open Media took the lead and engaged with the ANC as well as other opposition political parties and progressive civil society organizations about the urgent need to transform the SABC into an independent broadcaster. The timing was vital because a non-partisan public broadcaster was an essential ingredient of a free, fair and open election.

Cyril Ramaphosa, then secretary-general of the ANC and now Deputy President of South Africa, showed the way when addressing the campaign in 1992: "The ANC believes that unquestioning loyalty by a public broadcaster to a ruling party is incompatible with democracy. The ANC is committed to public broadcasting which is independent of the government of the day and which owes its loyalty not to any party, but to the population as a whole."

When the ANC came to power in 1994, new policies were put in place to guarantee the independence of the SABC. One of the key achievements was the introduction of an independent and open process for the appointment of SABC board members with as much popular participation as possible. Those holding office with the government or political parties were not allowed to serve on the board.

These policies worked – for a while.

In 1996, the SABC invited business consultancy McKinsey to look into its management. These consultants did what they usually do: they concentrated on the most efficient and cost-effective way of doing things.

The SABC gradually changed into a commercially oriented enterprise with less and less emphasis on its public-broadcasting mandate. In 1999, the SABC was converted from a corporation in its own right into a company with the government as its sole shareholder – SABC Ltd. This was to give the state more oversight in financial matters and thus prevent future financial crises. On this occasion, the clause excluding political office holders from board membership was quietly dropped. 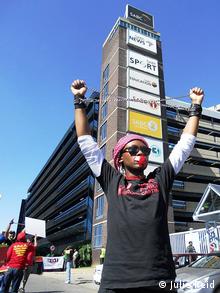 Protest in front of SABC headquarters in Johannesburg, South Africa

The corporation became a commercial public broadcaster. The shareholder – the ministry – interfered in management decisions under the pretext of ensuring correct use of taxpayer money (although only a very small percentage of SABC revenue comes from the state budget).

The ruling party increasingly flexed its muscles when it came to important appointments. It pushed through members of the board sympathetic to the party and "deployed" (the official term) its people in top management positions, often without regard to their professional qualifications. The SABC was being commercialized and politicized at the same time – a toxic combination.

Ten years ago, the facade of a dream public broadcaster cracked open to reveal unsavory internal workings. It was discovered that the SABC had blacklisted a number of reporters, analysts and commentators who held views inconsistent with those of the ANC. Since then, the SABC has seen the rapid escalation of its on-going crisis of independence and credibility.

In 2008, the SABC was bankrupt. It was rescued only by a government guarantee that allowed it to borrow from commercial banks. Five years later the Auditor General attested that its books were still in disarray. In 2014 the Public Protector described the continuing financial mayhem and failure of corporate governance at the corporation as "pathological."

The appointment of a chief executive officer and other group executives after approval by the Minister of Communication was the first overt step towards direct government control since the fall of the apartheid regime. The current minister is now trying to introduce legislation that would also see direct ministerial control of the appointment of the SABC's non-executive board members, thus returning the broadcaster to the status it had when South Africa was under apartheid rule.

South Africans see and hear the effects on air every day: opposition voices and reports on scandals implicating the ruling party, and the State President in particular, are sanitized or censored. An informal "good news" editorial directive ensures an emphasis on positive stories. The culture of professional, independent public broadcasting in the corporation has almost completely fallen by the wayside.

Organized civil society groups, such as the SOS Support Public Broadcasting campaign as well as concerned members of the public, find themselves making the same statements in response to the same issues and raising the same alarms over and over again, at times almost immobilized by the outright lack of political will on all levels (from board to parliament) to get things right.

But, frustration aside, this is exactly what SOS will continue to do. Our dream public broadcaster – independent, empowering, open for all – is well worth the fight. We know because it was within our grasp not so long ago.

This article originally appeared as part of African Free Press – a collection of 40 essays by African journalists and media experts exploring the current state of media freedom in Africa. African Free Press, an online dossier and special edition newspaper, commemorates the 25th anniversary of the 1991 Windhoek Declaration, a landmark statement of free press principles adopted during a UNESCO seminar on promoting an independent and pluralistic African press. African Free Press is a project of the Media Institute of Southern Africa and supported by DW Akademie.

The original article was published under a Creative Commons Attribution 4.0 International (CC BY 4.0) license and has been adapted for publication on #mediadev.

The 1991 Windhoek Declaration is a historic call for media freedom by African journalists. In this dossier, researchers, journalists and others review progress made over the past 25 years.