Home / Who we are

Through the pilot project "Space for Freedom", DW Akademie and local partner organizations are helping create new perspectives for journalists and media in exile. 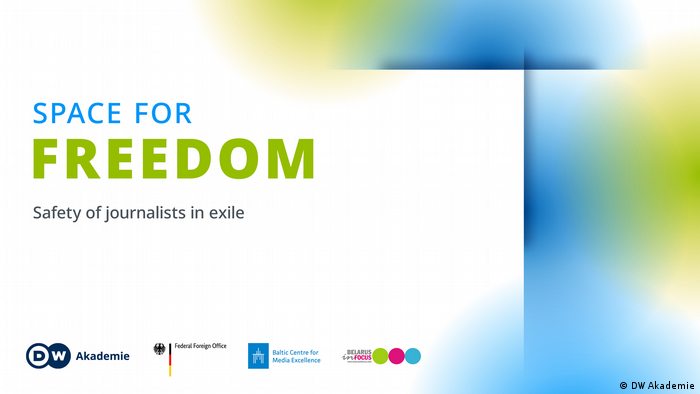 Journalists in many countries around the world are facing increasing pressure as governments see themselves threatened by critical reporting. As a result, media professionals are intimidated, mistreated, persecuted or even killed. Given the ongoing repression, thousands have left their own countries to protect themselves and their families.

In response, DW Akademie has launched the "Space for Freedom" project together with local partner organizations to enable these journalists to continue their crucial work in exile while, and at the same time, securing their livelihood.

Together with the organizations "Belarus in Focus Information Office" and the "Baltic Centre for Media Excellence", DW Akademie is supporting Russian and Belarusian journalists in establishing themselves professionally, acquiring new qualifications while continuing to reach their audiences. DW Akademie provides the journalists with scholarships, assists them in relocating, and offers consultations and trainings.

DW Akademie is also helping exiled media outlets in securing a digital infrastructure and expanding their reach. This has become increasingly important given the repression, massive propaganda and digital attacks that prevail in their countries.

"With the project, we feel we're back on solid ground and have the strength to continue," said one Belarusian participant who, for safety reasons, asked to remain anonymous. "The security training helps to reduce the fears of colleagues working in Belarus and to understand all aspects of safe communication via messenger services," the participant said.

Reliable information for the Afghan population

"Due to the project, I no longer feel as lonely or despaired as before, or afraid of being left behind. I’m also more optimistic about my future and getting ahead professionally," said an Afghan participant who also asked to remain anonymous.

He is one of 20 Afghan journalists living in exile in countries that neighbor Afghanistan. Like their Belarusian and Russian counterparts, they, too, are receiving DW Akademie support with scholarships as well as training in digital journalism and digital security.

Experienced DW editors whose first language is Dari or Pashto are also assisting them in producing reports that can be published on DW platforms. These reports not only serve as work samples for the participants but also provide reliable information to people in Afghanistan and those in the diaspora. The journalists are also receiving coaching to help them enter the local, regional or international media markets.

DW Akademie is conducting the "Space for Freedom" project as a network partner of the German government's Hannah Arendt Initiative. Through this initiative, the Federal Foreign Office and the Federal Commissioner for Culture and Media are supporting journalists, media workers and defenders of freedom of expression in crisis and conflict areas, as well as those living in exile in Germany.