Facebook is a “happening party” right now, says Sahar Habib Ghazi from Global Voices. If you're not there, your content doesn't get attention. But according to her, this might change soon. 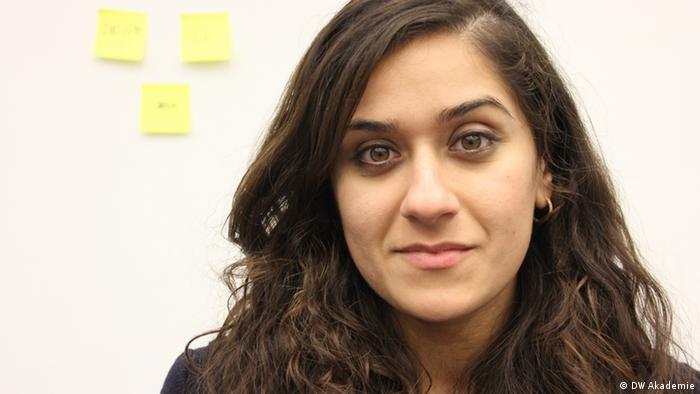 Global Voices is a community-based newsroom with more than 1,400 volunteer writers and translators from all over the world. The content is based on conversations or sources from stories on the Internet, such as what people write in blogs, on Facebook or on Twitter. Global Voices looks at the conversations or the things that people are already making and tries to piece a story together based on that – it's a different approach to storytelling.

Sahar Habib Ghazi, the managing editor of Global Voices, explains to #mediadev why she thinks civic media is the future of journalism, why social networks are a danger to freedom of expression and why she nonetheless has hope.

What is the role of civic media?

At Global Voices, people who create the content are also the audience and the audience creates the content. It is a very agile news environment. For me, that's the future of media. I don't think every journalist has to learn citizen media or go on social media. I think every Internet user is becoming a journalist because he or she has to start doing what journalists do, which is to look at the information and try to decide what's propaganda and what are facts. I see the line between Internet users and journalists blurring.

What is our task then as journalists?

For us [journalists], it is very important to not be defensive about losing our jobs because the common goal is to create an environment where there is free thought and information. There was a time when we were gatekeepers of information and I still think it is important for information to flow in certain directions. There is a certain level of responsibility. We as journalists have a toolset; we seek out factual information and pay attention to sources. I would like us to be more open about spreading that culture to other people.

For example, if your aunt or your uncle posts something on Facebook that is propaganda, as a journalist you should say that the source of the piece is not great or that someone with a special interest is trying to spread this information.

Can digital technology foster this process?

I see the Internet in its purest form – by which I mean what [the Internet] was before social networks were created – as an equalizer. If I have access to technology, I can access the thoughts and the ideas of a person at another place even if both of us can't physically travel because of visa regimes or for economic reasons. Just by paying for an Internet connection and maybe having access to a smartphone, I can get access to other people’s ideas.

But I worry about the Internet because it's going from this decentralized network to everyone moving to social networks. For example, Facebook creates these artificial circles based on your interests or what an algorithm decides are your interests. When I shop at a grocery store, I may have a shopping list but sometimes in the store, I see something that's not on my list and I still pick it up. On the Internet, it would be the same thing. But on Facebook, I only see the things I've seen before, which creates an environment that doesn't encourage the exchange of ideas or a more open world of information.

Is there something we can do about this development?

I think it's important for activists who advocate for an open Internet to speak out against initiatives like Internet.org, which is basically Facebook providing sections of the Internet for free to people. [Facebook] says it is overcoming the digital divide but that's not true because if someone goes on Internet.org, this person won’t see the Internet with all the different websites that I have access to. They'll only see the curated list of websites that Internet.org wants to show them.

You need to use Facebook to bring people's attention to issues. Right now Facebook is a really happening party. Everyone's there. If there’s a really happening party going on, I can set up a lemonade stand outside and try to sell my lemonade but no one’s coming outside if the party is offering really fabulous cocktails for free inside. Maybe I need to step inside the party and sell my lemonade there. And that’s what we do. We promote our content on Facebook. Sometimes that works. After the Paris attacks one of our stories, "The streets of Paris are as familiar to me as the streets of Beirut", went viral and got over 100,000 views. It's a short piece, a personal essay from one of our contributors who is from Beirut. If the story wasn't posted on Facebook, I don't think the story would have spread the way it did.

Will there be a way to get attention without Facebook?

It may not seem like it at the present but most people will realize the information environment they are subjecting themselves to on Facebook is more harmful. Right now, it's like fast food. Now, they feel it is great but in the long term they will put on weight and their cholesterol and sugar levels will get really bad. And they're going to realize they have to bring some discipline into their lives.

I already feel that for the younger generation, the under 22’s who are often called Generation Z, Facebook is not their app of choice – Snapchat is. I already feel a shift happening where people are starting to question these social networks and I see many people moving to messenger apps. We as media curators or people in the digital media space have to figure out how to adjust in order to distribute content. We have gone from newspapers to televisions to websites to social networks. I don’t think social networks will keep people's attention, so it will probably go in the direction of private messaging apps.

Do you have an idea of what the future could look like?

You just have to keep your mind open. I don't like how dependent I am my mobile phone. Why am I constantly checking it? I think it doesn't have a good effect on me, on my thought process, on my decision-making. I'm too responsive to information right now. Younger people aren't. They've had this device close to them their whole lives so they develop better mechanisms. They can have a social conversation without checking their phones constantly. I think when you're a certain age when you’re introduced to technology, you have to unlearn. I'm hopeful things will change.

Interview by Marina Strauß (kh/kj). This interview has been edited for brevity and clarity.

A new book examines five leading media organizations that are successfully making digital news work - for now at least. “Innovators in Digital News” has some important lessons for those adapting to the digital world. (06.01.2016)

Amid all the hype about the Internet and social media transforming Africa's development and democracy, ten African digital innovators give tips on how online information and social media can better meet people's needs. (26.01.2016)