Short film competition "African Women in the time of COVID-19"

They are stories of domestic violence, loss of opportunities and burden of care but also of resilience and hope: Filmmakers reveal the extremely difficult circumstances for African women. See the winning entries here. 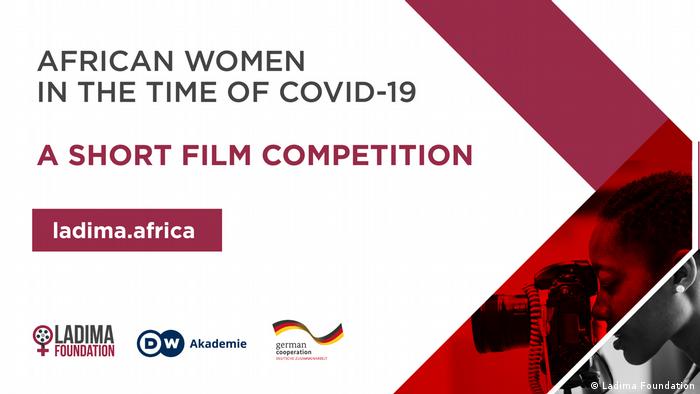 The Ladima Foundation, a Pan-African non-profit organization supporting women in creative industries and a partner of DW Akademie, launched the "African Women in the Time of Covid-19" Short Film Competition. They called on African women to share their stories about the personal, economic and social impact of Covid-19 in Africa. An overwhelming response saw submissions from just under 200 women from 18 African countries. The majority of entries reflected the theme that more often than not, the pandemic has impacted women harder and in different ways than their male counterparts.

The competition ran from June 1 to 21. Following their premiere on the Ladima Foundations Facebook page on July 10, the selected films are now available for viewing on various platforms.

The ten selected films were chosen by a panel of expert judges including Cornélia Glele, a journalist, blogger and filmmaker from Benin; Lizelle Bisschoff, a researcher and curator of African film and founder of Africa in Motion (AiM) Film Festival in Scotland; Nse Ikpe-Etim, a multiple-award-winning Nigerian actor of stage and screen; Professor Martin Mhando, a research fellow with Murdoch University, Western Australia and an award-winning filmmaker; multimedia artist and filmmaker Philippa Ndisi-Herrmann.

The following films were selected:

"Being" by Malak El Araby (Egypt)

El Araby is a 21-year-old film student at the American University in Cairo. She also won third place at the UIFF in South Korea and has worked on multiple movies in Egypt.

Tholakele is a 26-year-old aspiring filmmaker from Umlazi, South Africa.

Ochieng is a 22-year-old creative based in Nairobi, Kenya and an undergraduate student at the Taita University.

Mathias is a writer, cinematographer/filmmaker and actor.

Stratton is an actress, writer, director, producer and co-founder of production company "You Kicked My Dog Productions". Their short film "Sides of a Horn" qualified for the 2020 Oscars.

Gathee is an emerging director/producer.

Hammond is a student at the National Film and Television Institute in Ghana.

Agello is a professional dancer and choreographer and a filmmaker based in Nairobi.

Shah is from Nairobi and has worked in film and advertising since 2006. She specializes in production design and has written and directed seven short films.

"Loop: Every End Has a Beginning" by Faith Ilevbare (Nigeria)

Ilevbare is a visual artist. Her work often deals with social issues affecting women globally. She currently works in Lagos as a video journalist for the BBC.

The Ladima Foundation supports and recognizes African women in film, TV and other creative industries. Through partnerships and collaborations in various countries, as well as through Pan-African networks and interventions, the Ladima Foundation is committed to developing training, networking, and related opportunities for women professionals who demonstrate their seriousness and commitment to their craft.