Saving lives with social media: The power of the crowd in emergencies

Social media is an increasingly vital tool for crisis response as non-profit organizations use it to save lives and help those in need. But its power to spread information means social media can escalate crises too. 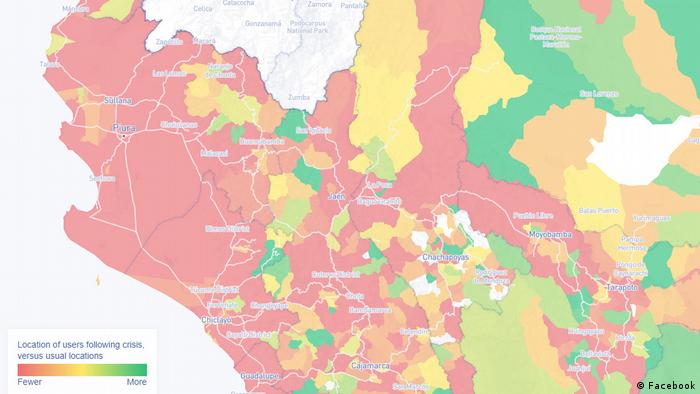 Social media and the prevalence of smartphones is changing communication in times of disasters. Instead of consulting printed casualty lists, survivors now check social media to see whether their friends and loved ones are safe. Similarly, social media has given people and communities affected by disasters the means to communicate directly with disaster responders.

In Mexico for example, the UN refugee agency UNHCR answers questions from refugees and migrants via Facebook, such as where to find shelter, how to apply for asylum or how to get the right to work. "Since 2015 we have noticed that a very large number of people were travelling with mobile phones and using Facebook and WhatsApp; mainly so that they could tell their families that they were ok," explains Mónica Vázquez from UNHCR Mexico. "So we decided that we needed to be on Facebook as well and help them find good information." Privacy and information security have been a major concern for the organization from the beginning, which is why UNHCR answers most questions via Facebook messenger, rather than the public Facebook page. One unexpected result of this personal approach: "People really stay in contact and let us know how they are doing, where in the asylum process they are. It’s as if they are talking to a friend," says Vázquez. Over the last 14 months she and her team have answered close to 1,200 questions via Facebook messenger. The UNCHRS’s help page "Confía en El Jaguar" – "Trust the jaguar" receives 1.3 million visitors each month.

A Crowdsourcing approach to humanitarian action 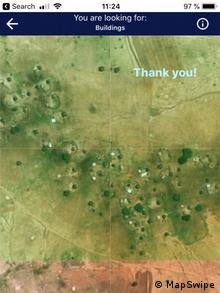 Social media and crowdsourcing can also help close gaps in the information that is available to humanitarian and development organizations. The Missing Maps Project, which is led by Doctors without Borders, the Red Cross and the Humanitarian Open StreetMap Team, combines online and real-world action. During on-the-ground "mapathons" and through a dedicated mobile app, users can help analyze satellite images of disaster prone areas, for which comprehensive maps don't yet exist. The information is then used to plan activities such as the distribution of bednets to fight malaria. The information is also added to OpenStreetMap and can be used for free by anyone in the world. Since 2016, 27,000 users have mapped close to 600,000 km² in this way, assisting 154 humanitarian and development projects.

During rapidly developing crises, such as earthquakes and storms, volunteer organizations like the Standby Taskforce, as well as newly developed algorithms, help disaster responders categorize information into themes such as requests for shelter, food, water or medical assistance. This can be done using hashtags on Twitter, for example. Countries like the Philippines, which have been using this approach for many years, have so far reported mixed results. Partly because many people forget to use the recommended hashtags on Twitter when faced with a crisis, partly because retweets often drown out new posts, and partly because users seldom post when they have been assisted or rescued, meaning that disaster responders have no way of knowing whether needs have already been met or whether somebody still needs help. 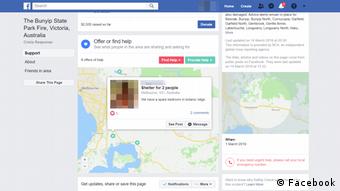 Unlike Twitter, Facebook data is more difficult to analyze, because a lot of the information on Facebook is not public — for example posts in closed groups or status updates shared with friends. Because of this limitation, Facebook has developed a set of dedicated tools for crisis response: Facebook’s "Safety Check," for example, allows users to quickly inform friends and relatives that they are well, if Facebook detects that they are currently in an area affected by a disaster. According to the company, 35 million people used this feature in 2018 to reassure their loved ones. In the aftermath of a crisis, Facebook also provides special groups through which affected communities can coordinate assistance and even ask for donations.

In addition, the company provides partners such as the Red Cross and some NGOs and UN agencies with access to custom Disaster Maps. These maps show anonymized and aggregated Facebook data to help analyze the situation on the ground. This includes data on where groups of people are or where they have moved to, information that can be important for disaster responders who are trying to make sure that aid gets to the right places. For example, when wildfires in California filled the air with smoke and ash making it hard to breathe, the US organization "Direct Relief" used information from Facebook’s Disaster Maps to plan their distributions of breathing masks. Facebook emphasizes that the data cannot be used to identify or track individuals.

But in the online world as in the offline world, not everyone has good intentions. In South Sudan, hate speech on social media has become such a big problem that the UN has warned that certain platforms are playing a key role in pushing the country farther along a path of ethnic violence. One way to address this issue is by trying to use social media to predict where violence is likely to erupt. "If hate speech goes up this week, violence will go up next week," explains Althea Middleton-Detzner, Director of the Hate Speech program for the NGO Peace Tech Lab. Her organization has just published an updated lexicon of South Sudanese hate speech that can help civil society organizations tackle the issue. 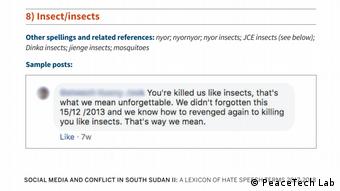 In addition, Peace Tech Lab is currently working on using the lexicon to train an algorithm that will be able to predict where violence is most likely to erupt, based on the location of social media posts. This project is supposed to be operational later this year. While the system currently only works at the state level, Peace Tech Lab is working on increasing the accuracy to the city-level and even show which ethnicities are more likely to be targeted. The analysis will then be shared with the UN in South Sudan as well as other groups who are present on the ground.

One thing is clear: Social media is changing how people communicate during emergencies. Instant communication and real time data helps humanitarian organizations and survivors to respond and recover faster and more safely. At the same time, misinformation and disinformation can increase insecurity for vulnerable communities. Institutional disaster responders need to learn how to proactively deal with these challenges, while media and information literacy programs in disaster prone countries can play an important role in helping journalists, community leaders and survivors access vital information and identify misinformation. Better informed communities can make more informed decisions about their future. In the aftermath of an emergency, that can be the difference between life and death, between recovery and deterioration.

Timo Lüge is a senior humanitarian communications consultant who focuses on improving the flow of information between the affected population and disaster responders in emergencies. He has previously worked for the UN, the Red Cross and multiple NGOs. He tweets under @timolue.

When disasters such as the Nepal earthquake hit, communications are often cut and radio and TV stations off air. First Response Radio aims to get on air within 72 hours of a calamity with its 'station in a suitcase.' (26.05.2015)

Social media is now an integral part of our society, completely reshaping how we communicate and who we communicate with. Here are our #mediadev articles on the topic. (26.07.2016)