Publication: "Considering the Dark Side of the Media"

Many media act as mouthpieces of the powerful and advance polarization in society. This dark side of the media and its interaction with other parts of society is the focus of a new DW Akademie discussion paper. 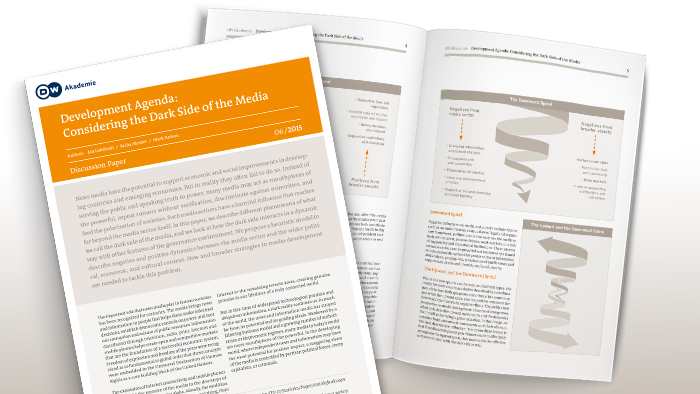 "Development Agenda: Considering the Dark Side of the Media" describes different phenomena of what the authors call the dark side of the media, and it looks at how the dark side interacts in a dynamic way with other features of the governance environment. It analyses societal dynamics and points out implications for media development. This paper also marks the start of the new consultation project "Media Development and the Governance Debate: Reframing the Agenda", which DW Akademie is launching in cooperation with the Center for International Media Assistance (CIMA).

News media have the potential to support economic and social improvements in developing countries and emerging economies. But in reality they often fail to do so. Rather than serving the public and speaking truth to power, many media spread propaganda, repeat rumors without verification, discriminate against minorities, and feed the polarization of societies. Such media actions have a harmful influence that reaches far beyond the media sector itself. This paper describes different phenomena of what is called the dark side of the media, and it proposes a model to describe negative and positive dynamics between the media sector and the wider political, economic, and cultural context. New and broader strategies in media development are needed to tackle this problem.

Read "Development Agenda: Considering the Dark Side of the Media" on ISSUU.

Considering the Dark Side of the Media | ISSUU