In Ghana you can say and write what you like. But DW Akademie is working here because, as local project manager Aarni Kuoppamäki writes, freedom of speech is just the starting point. 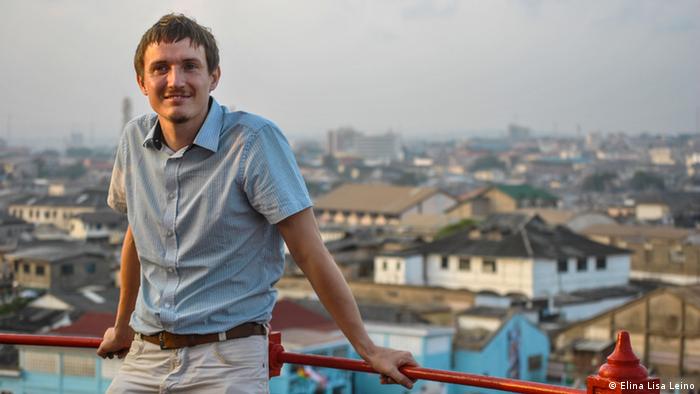 Citing anonymous sources, a small newspaper reports that the Human Rights Commission is bankrupt. Employees at the state energy company accuse the president of causing the daily blackouts. And government representatives and employees argue about the number of jobs threatened by the energy crisis. On this day in May it's business as usual for Ghana's media, with one person's word against another and accusations flying. Unreflected opinions like these are symptomatic of Ghana.

The West African state ranks 22 out of 180 on the Press Freedom Index, ahead of the USA, Japan and France. People here can say whatever they want to – and they do. Every day, Ghanaians from all walks of life express their thoughts over the airwaves, especially on radio. But freedom of opinion is just the starting point. It's unlikely that someone has looked into the facts concerning the destitute Human Rights Commission or the jobs in peril, and can distinguish between a well-founded statement and simple assertions. Information here is on equal footing with whitewashing and propaganda. Almost everyone agrees that the infrastructure and education, health care system and economy are all in a sorry state. But while the government and the opposition are busy pointing fingers at each other, Ghana's citizens – about one fourth of whom are illiterate – are left in the dark.

One reason is that money rules communication. Many media pay their journalists little or nothing at all. Journalists thus earn a living through "soli" – solidarity payments from the organizers of press conferences and workshops. A "soli" is usually a flat fee to cover transportation costs, and is often more than what a journalist earns in a day. Media professionals are paid to accept press releases or speeches as the basis for their reports; research is not encouraged. Ghana is a country of blurred lines, in this case between journalism and public relations.

But it's too easy to assign guilt to just one party. Media companies compete with each other to keep their payroll low. Advertisers know no one will show up next time if they fail to pay the "soli", and journalists have few alternatives if they want to feed their families. It is not really corruption, they claim, if advertisers want to show their appreciation for the work journalists do. Reporting , then, doesn't have to be influenced by who paid how much to whom. But the reality is that non-governmental organizations involved with key social issues find it hard to get media coverage if they don't pay the "soli"

The German concept of media ethics would classify "soli" as corruption. When the German media describe corruption as a "malignant tumor" it evokes the idea that corruption could easily be surgically removed. While it's true that replacing individual wrong-doers can be effective, taken in a Ghanaian context "soli" is not just a wide-spread cancer; it's the expression of overall social interactions. In many parts of Ghana, community life operates on the "I'll help you if you help me" principle of social security.

The German social system is organized by the state: health, accident, long-term care, retirement and unemployment insurance protects citizens from unexpected occurences. If the Oder River in eastern Germany causes a flood, for example, and carries your house away, the government steps in with emergency relief funds that cover most of the damage. But in Ghana, if you lose your job, get sick or grow old you have to rely on acquaintances. When a grandmother dies, her family goes from house to house to collect donations for the expensive funeral, and somehow manages to scrape enough together. In other words, in times of need you can count on the community, and anyone who can help does. Doing anything else goes against the public spirit.

Helping each other is a must because few Ghanaians have financial reserves. This past December, an unemployed father of five achieved national fame in a television interview when described how he fed his family. He said "kpakpakpa", a term that few Ghanaians were familiar with. It means improvising, and he explained in broken English how he scraped by without resorting to stealing. Instead he sold small items at the side of the road, although he earned very little. But praying every morning was very helpful, he said, because "someone has your money in their pocket." This accurately describes the lives of many in Ghana. A rap song that included excerpts from the interview made kpakpakpa a hit and a code word for a survival strategy.

If you think young people are just interested in fashion and music, think again. As a DW Akademie project for community radio stations shows, if they're given a platform they devote themselves to social issues. (12.09.2014)

A teacher once explained what happens if you have any excess cash: You get 50 cedi – around 12 euros – from somewhere. On your way home you meet five people who are broke, so you help them out. You arrive home with just ten cedi, but there are five people you know who owe you a favor. So if you need help next week, they'll be there. This approach is especially used for larger expenses such as school fees, books, uniforms or medicines. A big spender is seen as a good person, and this gives moral value to the money because it enables the person to do good.


When the priest asks for a 50 cedi donation from his Sunday congregation, he will bless the donor no matter where the money comes from. Traditionally the wealth held by the chiefs who administer the land in Ghana is supposed to trickle down to the people. In this sense, today's politician or businessman is the equivalent of a chief – another blurred line. Still, Ghanaians don't blindly accept corruption.

According to the renowned Afrobarometer survey, more than 80 percent of Ghanaians feel that officials from the government, local government, internal revenue service, judiciary and parliament, along with police officers and private sector executives, are involved in corruption. Here as well, people talk more about corrupt individuals rather than the society at large where it flourishes. The connection is obvious: in a system where social security depends on informal networks, people can hardly refuse to help if they have the means to do so. This also applies to those in public office who have access to material or intangible resources, regardless of whether they're on the police force, at the motor vehicles department, or in the immigration office. Getting involved is a social obligation. And while you might help your sibling for free, you'd expect a small payment from a friend, and a larger one from a stranger.

According to the Afrobarometer, 56 percent of all Ghanaians think it is acceptable to ask an elected official to pay a hospital bill, for example. The former assistant to a regional minister tells stories about the long lines of people that would form in front of the minister's house in the morning, and in front of his office in the afternoon. They would ask him for money and he would give them some. On the weekend he would attend a handful of funerals and add around 500 cedi or roughly 125 euros to the pot. A month of funeral donations can outstrip a minister's official salary, and so the line here between administering resources and owning them outright is blurry. Journalists also have access to a resource, the public, and the logic of the system dictates they be paid for sharing it.

DW Akademie is doing its part to encourage more media professionals from Ghana and elsewhere to reflect on their role and self-image. We'd like people to be able to express their opinions, but to also have support from the media in assessing what others say. But if journalism is to change substantially, social interactions need to change with it. "Soli" is a question of mentality and the economic realities entangled with it. The more people enjoy social security and rely less on the kindness and money of others, the more values and ideals can come to the fore, such as truth or personal fulfillment.

A social shift is underway that is making it easier. The village community network and traditional extended family is slowly being replaced by the nuclear family with its friends and acquaintances. Young, well-educated Ghanaian women are driving this shift. The community that revolves around need is based on traditional values and the woman's roles as wife, mother, housekeeper, vendor and small-holder farmer. So those wanting to embark on an academic career first have to break with a tradition that expects people in their early twenties to marry and start a family. From 2000 to 2010, the average age of people marrying in Ghana rose from 22.3 to 24.8. This shift is likely to be welcomed by Ghanaian men, since living with a modern Ghanaian woman who earns good money means relying less on kpakpakpa.


Aarni Kuoppamäki completed a traineeship with Deutsche Welle and has to date worked for DW Akademie in 15 countries. He has been living in Ghana since 2012 where, as a local project manager, he coordinates media development. In Ghana, DW Akademie is actively promoting rural community participation, improved access to information from public sources, and practically-oriented journalism training.