Pakistan: "Media should be accountable to the public, not the government"

Asif Khan is DW Akademie's Country Representative in Pakistan, where the focus is on promoting free and quality media and increasing journalists' safety. Working in media development, he says, was not his original goal. 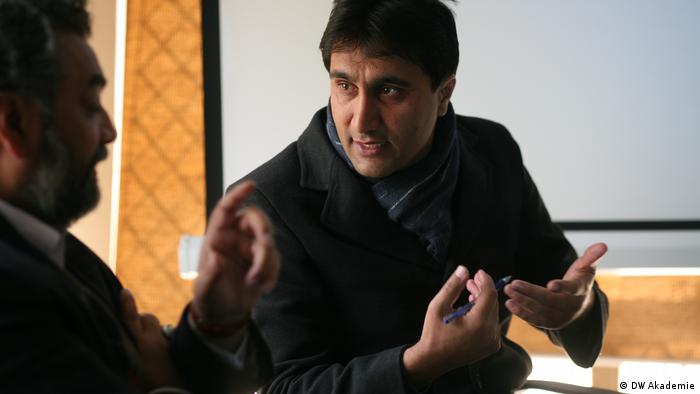 "I wanted to put together the orchestra instead of playing in it", says Asif Khan about his work.

While studying International Relations in Peshawar, a city in northern Pakistan, Asif Khan was aiming to become a diplomat. Little did he know that a few years later he would become a media manager and later a specialist in media development. Asif Khan has been DW Akademie's Country Representative since 2014.

"Our overall aim is to strengthen a free, independent and pluralistic media," says Khan. "I personally think that the media in Pakistan should be more accessible, free from government and corporate pressure, decentralized and accountable not to the government, but to the public," he points out. "Media workers should be skillful enough to produce and broadcast professional quality content. This is what we are working towards." 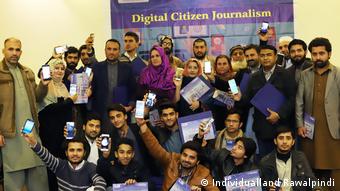 Participants of a Digital Citizen Journalism Training in Peshawar, organized by Individualland Rawalpindi with support of DW Akademie

Khan's entrance to the media field is an unusual one. In 1999, as a young college student, he decided to visit the city of Peshawar itself. He accidently got on the wrong bus and when he realized his mistake, jumped off and landed right in front of Radio Pakistan. He was curious to see the building from the inside and asked if he could have a tour. Radio Pakistan at the time was recruiting anchors for their first live broadcasts, so when a staff member asked him whether he had come for an audition, Khan simply replied that he had.

Khan convinced the team of his moderating skills, despite the fact that the shows were broadcast in Urdu and his first language was Pashto. He improved his Urdu and while at college worked as an anchor. He also gained management skills and became increasingly interested in the media business' entrepreneurial side.

"I wanted to put the orchestra together instead of playing in it," says Khan. He began working in media development right after graduation. He helped others set up radio stations, hired, trained and managed teams, developed marketing and communication strategies, and helped a number of media houses become platforms for public dialogue.

Local know-how as a basis for sustainable media development

DW Akademie works closely with local partners in Pakistan and draws on the experience of universities, media organizations and experts. Khan has been involved in almost all projects since the start, developing strategies for implementing them and for responding when things go wrong. Being familiar with the media landscape and local structures helps him and the team design projects and identify suitable cooperation partners. His understanding of the government system, and networking with other media development actors, has also helped him launch successful projects on schedule. 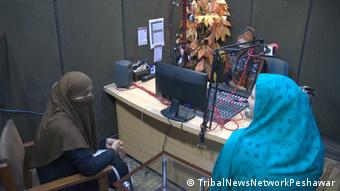 One cooperation project is focusing on Pakistan's rural tribal areas still affected by conflicts and terrorism. People's voices there are rarely heard and their issues seldom covered by mainstream media. DW Akademie is supporting local radio stations, social media news outlets and citizen journalists in these areas so that marginalized communities can acquire the tools and skills needed to reach a broader audience.

Asif Khan himself grew up in the tribal Orakzai District. "When I was young, radio was the most important medium for my parents and grandparents," he recalls. "I still remember them arguing about which radio channel to listen to. This is also how I first came across Deutsche Welle. Back then, listening to the radio was the only way to get information from outside the region."

Another DW Akademie cooperation project is focusing on the profession's psychological impact.  Being a journalist out in the field in Pakistan "can be emotionally challenging," says Khan. Many of the journalists suffer emotional problems resulting from the traumatic or violent stories they cover. "Conflict, terrorism, counter-terrorism measures, a heavy workload and difficult economic conditions burden journalists and are leading to trauma, depression and other psychological problems," explains Khan. "This ultimately disturbs their ability to work and the overall quality of journalism in Pakistan." 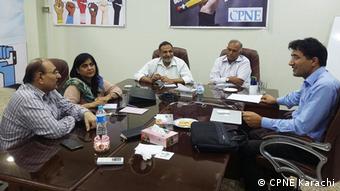 Asif Khan during a meeting with the Secretary General and project staff of the Council of Pakistan Newspaper Editors, Karachi

To tackle this problem, DW Akademie and its partners in early 2018 launched two Well-Being Centers, one each in the cities of Quetta and Karachi. DW Akademie had previously run a similar program in Peshawar. The centers offer journalists free psychological counseling and make media outlets more aware of trauma and prevention. Khan says the journalists welcome the services and the resulting public debate around emotional trauma. "Journalists and media workers say that for the first time, a project is aimed at their personal well-being, which is also linked to their professional performance," he says.

For Asif Khan, DW Akademie's cooperation projects in Pakistan are a significant contribution to supporting the country's free media and strengthening the important work of journalists. He says he is glad to be part of these projects. "When I look back at my 'wrong bus' episode two decades ago," he says, "I think that it was a perfect push by nature to make me contribute to media development in Pakistan."