Overcoming stage fright and the jitters

How do you keep an audience riveted during your talk? United Nations volunteers learned how to overcome stage fright and appear confident at a DW Akademie workshop on media training. 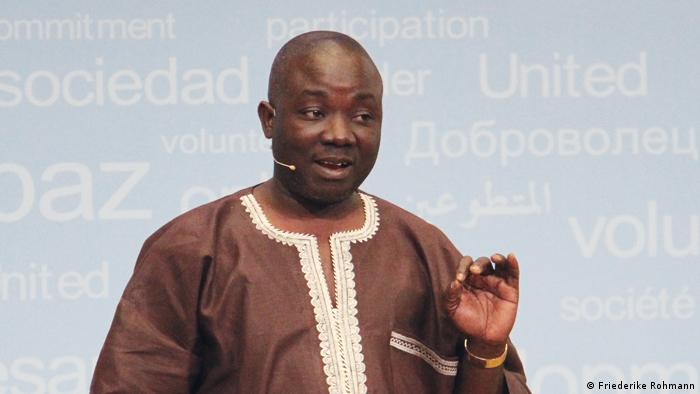 Moses Zangar knows what it's like to feel nervous when speaking in front of an audience. But now he's figured out how to work with the inevitable jitters. At a DW Akademie media training workshop held in Bonn, Zangar learned how good preparation and breathing exercises can help speakers overcome anxiety. "The most important thing is to feel confident," says the 43 year old from Liberia. "If you're nervous you can't get information across the way you were hoping to."

Zangar is one of more than 6,000 United Nations Volunteers (UNV) worldwide. The goal of the volunteer service is to support the achievement of development goals in more than 130 countries around the world. At the first "UNV Partnership Forum," a networking event held in Bonn in the fall of 2014, Zangar and seven other volunteers were each asked to give a "Blue Room Talk" where they would report on their experiences as volunteers in front of an audience of more than 100 international guests. 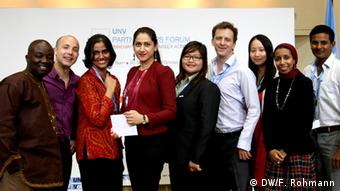 Few people feel at ease when speaking in public. That's why DW Akademie and the UN offered an intensive media training workshop to the eight participants from Cambodia, China, Egypt, Great Britain, India, Ireland, Liberia and Spain. "Each volunteer had an exciting story to tell," says DW Akademie project manager and trainer, Merjam Wakili. The speakers all had different reasons for getting involved in areas such as education, health care or voter turnout. "The challenge was to get up on a big stage and confidently tell their stories in just five minutes," she adds. Wakili only had one day in Bonn to prepare the eight speakers. She had, however, spoken with each of them several times before over Skype to work out their individual strengths and weaknesses.

When they arrived in Bonn, Wakili coached them in front of cameras, giving them tips and helping them fine-tune their presentations. The volunteers learned there is more to a good presentation than just natural talent. Personality plays a role, as do strong presentation skills. "But presenters often try to crameverything they know into just one statement," Wakili explains. "In doing this, they can't get a clear, core message across." As a trained journalist, Moses Zangar is used to asking questions. But taking center stage himself was a new experience. "I never address the public or speak at public events," he admits, but says that the media training helped take the edge off the experience for him and the seven other UN volunteers.


Zangar opened his Blue Room Talkwith a confident, powerful statement: "The volunteer service is the best thing that’s ever happened to me." He continued by telling the audience about how his UNV work had brought him to Sudan, recounting his story in a manner that was calm,but expressed his underlying passion. At the end of the talk, Zanger and the seven others got a standing ovation as well as requests for them to speak about their experiences at future events.

Many of the participants at DW Akademie's media training workshops have found that professional coaching has helped advance their careers. DW Akademie began working with a number of organizations in 2006, including United Nations organizations such as UNV, the UN Development Program and the UN Convention Framework on Climate Change. In addition to giving workshops focusing on interviews, statements or press releases, DW Akademie also offers coaching for top managers and executives. For Jennifer Stapper, who heads the communications department at UNV, DW Akademie coaching for the Blue RoomTalks was crucial to ensure that the speeches were a success. "For many of our staff , the training highlights the fact that they have a tendency to overuse UN jargon," she says. 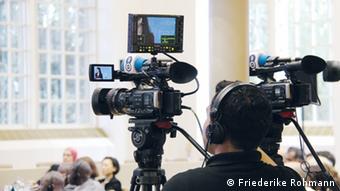 Daniela Wiesler enjoys hearing feedback like this. She set up DW Akademie's Media Training program in 2005 and since then has developed and conducted numerous workshops. She thinks it's very important to work with the United Nations and other NGOs. "If we can help people in these sectors communicate more effectively, more people will know about their work," says Wiesler. "That's especially important in areas where the public needs to be more aware of what the staff are working on and why," she says. The successful cooperation between DW Akademie and the United Nations is set to continue. An official agreement will soon be drawn up for a new, long-term partnership program.

Moses Zangar from Liberia is now working with the UN Development Program in Zambia and says he'll continue to benefit from the coaching he received from DW Akademie. "I'm a communications officer now and can't wait to apply everything I have learned," he says.