New Vibes by teenagers and for teenagers in southern Serbia

Three modern websites that have the support of DW Akademie give young people in southern Serbia a voice. The "Youth Vibes" site went online in March. This is where teenagers write for teenagers. 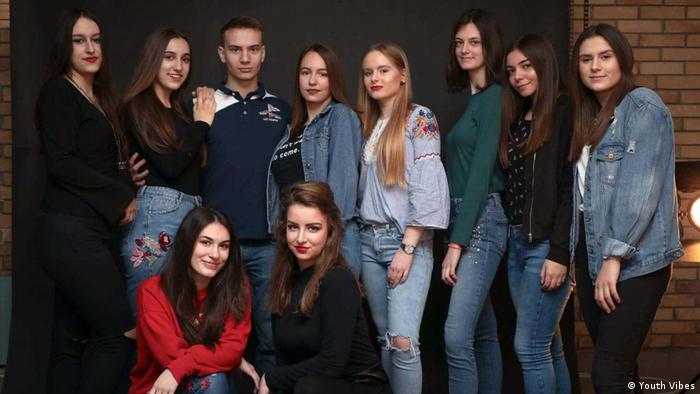 Teenagers write for Teenagers: The team of the new Website "Youth Vibes" in southern Serbia

"We are so proud," says Jovana. "After all, we started from scratch a few months ago and did everything ourselves." The new website for teens, "Youth Vibes", created by Jovana (17) and her friend Vanja (16), is indeed something to be proud of. Users enter a site full of bright colors, expressive photos and articles that cater to the interests of the young target group. 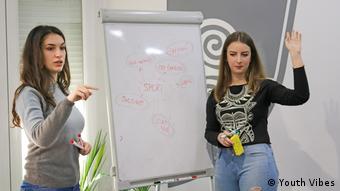 Which story makes it to the website is decided together.

"The Media write about, but not for young people"

Vanja, for example, writes about living with a depressive disorder. Kristina, Marko and Andjela write about migrants of the same age from Afghanistan who live in the urban asylum shelter. And Jovana talks about her visit to London's BETT, the fair for education technology – complete with personal travel tips for the British capital.

The two high school students Jovana and Vanja came up with the idea after a journalism workshop in the summer holidays 2017 organized by the Serbian media organization LokalPres in cooperation with the DW Akademie. "Vanja and I found that the media completely neglect us teenagers," says Jovana. "They write about teenagers, but not for us. They report about our great achievements – or when they find fault with us."

The two felt that this urgently needed to change. Suddenly, dozens of young people from almost all secondary schools in the city were enthusiastic about their idea: a website on which teenagers write about topics that truly interest teenagers. 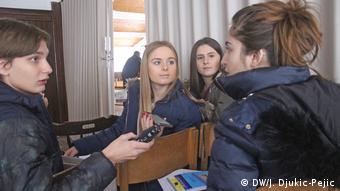 Three Youth Vibes reporter are interviewing a young asylum seeker in their city.

While some set out designing the website, others developed a marketing strategy. Jovana and Vanja held workshops for other young people to pass on the knowledge and skills that had acquired in DW Akademie’s journalism workshop. In November, they launched a survey on social networks. What channels do young people in Niš use to get information? What topics are they interested in? In just two weeks, around 250 users responded – and subsequently, the basis for the concept and structure of the site was established.

The teenagers showed their findings to DW Akademie. They also approached two Niš websites that DW Akademie has supported for some time: Megafon and the investigative site Južne Vesti. The twen website Megafon was launched at the end of 2017 by an initiative run by two former DW Akademie training participants and sees itself as a mixture of Buzzfeed and Vice. Launching "Youth Vibes" was not easy. "At first we were afraid that the other media wouldn't take us seriously because we didn't have any journalistic experience yet," says Vanja. "But everyone was enthusiastic and ready to help immediately. This comes as no surprise as Megafon and Južne Vesti are always looking for young, enthusiastic and talented people. 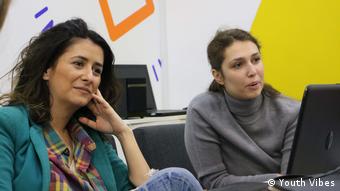 DW Akademie began developing a training and internship program for teenagers in early 2018. "I am fascinated by the enthusiasm of the young people", says Jelena Djukić-Pejić, a project supervisor for DW Akademie in Niš, who also works as a correspondent for DW's Serbian service. "We are in contact almost every day."

The new "vibes" in southern Serbia have also been noticed by media in other parts of the country. "The response has been very positive in Belgrade in particular because Niš has long been regarded as a symbol of the country's media decline," says Klaus Dahmann, country manager of DW Akademie for the Western Balkans. "The once extensive media landscape shrank here in the 2000s to a handful of editorial offices.  A new spirit is rising in from this valley of tears we want to help maintain it to the best of our ability."

In May 2018, the new site will be put to the test. Acting on a DW Akademie initiative, the youth association KOMS, which currently represents 97 member organizations, is organizing focus groups with teenagers from all over Serbia who will take a close look at "Youth Vibes" and give feedback. "Of course we still have to improve a lot," says Jovana. "That's why the support we get is so important to us. We want our site to be truly professional."