Morocco wants to bolster rural areas - as laid down in the renewed constitution of 2011. The local media play a particularly important role, and DW Akademie is supporting regional radio stations. 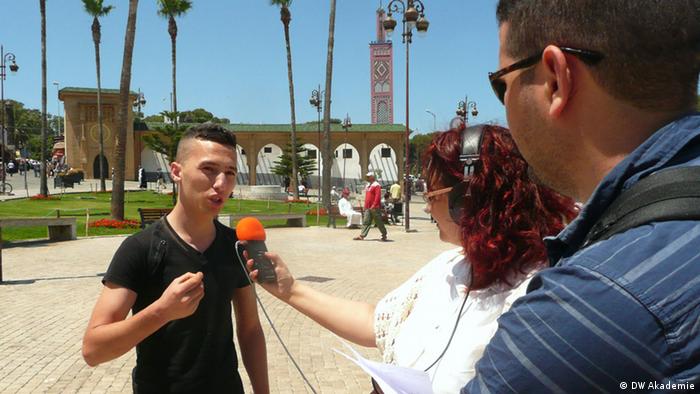 "This is Cap Radio, stay tuned! Our topic this Thursday: Expectations of young voters in the region", says the announcer in Arabic, introducing a forthcoming program. There are still two days to go before the program goes on air. The senior duty editor is dashing around the editorial offices, the printer has broken down. The interview team can’t find the recording equipment. On this Tuesday evening in Tangier, the city on the northernmost tip of the country, no one is going home any time soon. 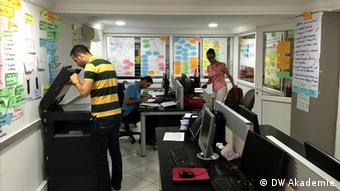 Last-minute rush before the program goes on air

In autumn of this year, Morocco held local and regional elections for the first time since the amended constitution was adopted in 2011. On three polling days in September and October, voters in Morocco's twelve regions elected municipal and regional councilors, and representatives to the second chamber of parliament. The regional polls - held for the first time - are of particular importance for the country's democratization process.

When increasing numbers of protestors took to the streets during the Arab Spring in 2011, King Mohammed VI promised reforms. An important pillar of these reforms is the regionalization project. Outside the urban industrialized metropolises of Rabat-Salé and Casablanca, as well as cities like Fes, Marrakesh und Agadir, there are extensive rural regions. Here, the infrastructure is often underdeveloped, and unemployment and illiteracy rates are high - with the result that young people in these areas have very few prospects. 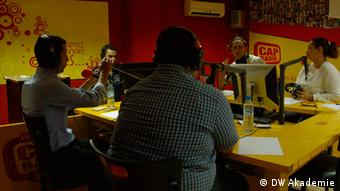 It's hoped the reform program will bring greater autonomy to the regional and municipal councils. The people living here can only profit from more transparent political processes and higher levels of participation. However, how does one encourage a populace that has felt ignored and disempowered for decades, to now take part in public dialogue and make use of its political rights? This is where local media such as Cap Radio in Tangier come into their own.

"Support for the regions includes giving local people better access to information", says trainer Charlotte Noblet. DW Akademie has been working in Morocco since 2011 and the partnership with Cap Radio was established in 2015. The private radio station broadcasts mainly in northern Morocco in Moroccan Arabic and the regional Berber dialect, Riffian. In a country that UNESCO gives an illiteracy rate of 33 percent, radio has a very important role to play, particularly in rural areas.

DW Akademie's trainers and consultants began by conducting a survey of regional radio stations. They then developed week-long journalism and management training workshops focusing on how to organize editorial staff; how to design and prepare a radio program, and how to conduct an opinion poll.

Giving the people a voice 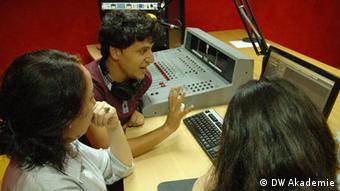 "We enjoy working with Cap Radio", says trainer Noblet. "Our colleagues are receptive of new approaches and put them straight to use." A good example of this collaboration is the special program "In Touch With the People" that was put together for the local elections. Two program hosts invited guests into the studio to discuss people's hopes for the vote and supplemented the debate with reports and opinion polls.

"Cap Radio uses its reporting to integrate the more remote villages that the larger media outlets in Casablanca or Rabat have so far ignored", says Cap Radio editor Hamida El Jazi. The station uses its programming to show local people how daily politics affects their environment and to help support their right to be heard. The more people make use of this right, the more autonomy the regions gain.

At Cap Radio, work will continue to improve editorial processes and enhance the quality of reporting. A training workshop for correspondents is planned for December. Ahmed Biyuzan, Cap Radio correspondent in Tetouan, recently took part in a workshop in Cap Radio headquarters. "I particularly like the 'Clubs d'écoute' (listening clubs): We listen to our reports and programs together and then swap feedback", says Biyuzan. "The workshops have improved collaboration between the editors and us, the correspondents in the regions. C'est bien!" 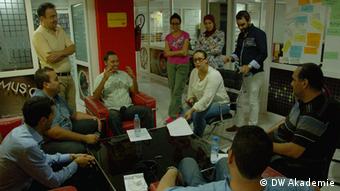 DW Akademie is working on the project "Improving regional reporting" with two local Moroccan radio stations and station groups, and is currently operating in the cities of Tangier, Fes, Casablanca und Agadir. A further workshop will be conducted in December 2015 together with Cap Radio, and is aimed at regional correspondents. This long-term project is financed by Germany's Ministry of Foreign Affairs.