How do you grab an audience's attention with your own ideas? Five young media makers tried it out at the first international Media Slam – part of DW Akademie's Youth Meets Media networking conference in Moldova. 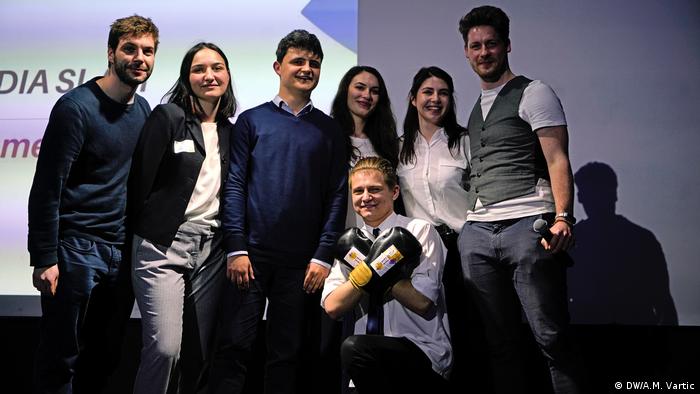 It's Sunday evening in Moldova's capital, Chisinau, and down in the "BandaBar" basement bar things are warming up. Some 100 participants from DW Akademie's three-day Youth Meets Media conference have come to catch the event's grand finale: the first international Media Slam. Five conference participants are set to go on stage and try their hand at slamming.

The Media Slam is basically a competition for the best presentation. The rules are simple: presentations must be entertaining and exciting, no longer than 10 minutes, and focus entirely on the presenter's own ideas or project. The presentation that gets the most applause wins. 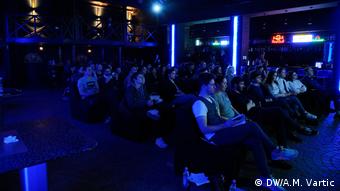 The five aspiring slammers come from Georgia, Serbia, Bosnia-Herzegovina and Moldova. They have chosen topics ranging from the spread of fake news on social media in Georgia, revolutionary youth media in Serbia, the upside of gaming, and why people often try to avoid journalists.

DW Akademie has invited Jan Lindenau to get the show going. Based in Berlin, Lindenau is a veteran of a similar slam for professional reporters. Here at the Media Slam he gives insights into his investigative research on the black market for the online video game, Fortnite.

"They have to be passionate about their ideas"

Büning and Savchuk got their start developing Science Slams, similar to the Media Slam format but for scientists who present their research to laypeople. The slams all have the same goal: to captivate the audience, no matter how complex the topic is. 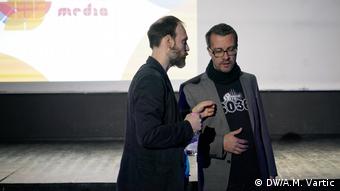 Savchuk and Büning work with slammers well before they go on stage, and together fine-tune their topics and presentations.

"We first ask them to give their presentation the way they were planning to," says Büning. For them, the worst thing is if I ask whether they've already given their talk at university," Büning explains. "If you can't really explain something, then you probably didn't understand it yourself. Getting stories out of them is sometimes like pulling teeth, but then we find amazing things that the slammers thought were just obvious."

The slammers' experience is as different as the topics they choose. "The most important thing is that they're passionate about their ideas," says Savchuk. "If they are, they'll inspire the audience, too."

He and his partner work with various types of people. "Some are pretty crazy and it's hard, but it can also be exciting. If their presentations work, audiences will reward this," he says. 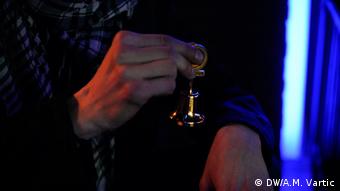 The slammers have ten minutes for their presentations. The bell signals their time is almost up.

The five young slammers in Chisinau have also had three days of training. Cristian from Moldova changed his topic at the last minute. Now he is using good and evil as an example to tell the audience how computer games can turn people's perceptions around.

You can break stereotypes like these, Cristian says, by the characters you develop for computer games.

Felicia is also from Moldova but focuses on a different topic. As a street reporter she often wonders why passers-by try to avoid journalists. Her family avoids them, too. "You'd at least think my mother would sympathize with me but she says she'd never talk to a journalist, either." Felicia calls for more trust and mutual understanding. 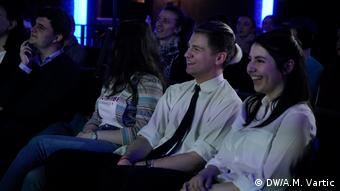 Slammers Cristian and Felicia from Moldova

"It doesn't really matter who wins"

At the end of the evening the audience determines who the winner is: it's the presenter who got the loudest applause. This is measured by an "applause-o-meter".

While Cristian and his gaming presentation have clearly won, the others received much applause, too.

"In the end, it doesn't really matter who wins. We're more interested in who's made the most progress since they started," says Savchuk.

"Competitions like these bring news editors and media workers closer to their audiences," says Büning. "I think these dialogues can create trust. We're hoping the format will be further developed at an international level, and perhaps result in a network where people from one country travel to another and then go on stage there, as well," he says.

The Media Slam was part of the networking conference, Youth Meets Media, that ran March 22 – 24, 2019 in Chisinau, Moldova. DW Akademie had invited some 100 young media workers from Moldova, Kyrgyzstan, Georgia, Serbia, Bosnia-Herzegovina and Ukraine to get together and exchange ideas and experiences. Participants took part in workshops and trainings that focused on topics including social media and verification, virtual reality, digital security, and storytelling. The event was part of a DW Akademie three-year project in Moldova, funded by the German Federal Ministry for Economic Cooperation and Development (BMZ).