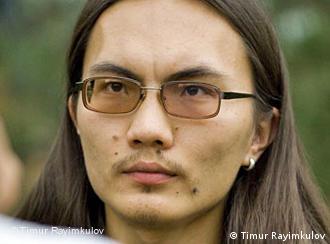 While the opposition led by former Foreign Minister Roza Otunbayeva has formed an interim government, President Kurmanbek Bakiyev refuses to resign and has called on his followers to resist. What would you call the events of the recent week?
Bektour Iskender: I'm afraid to call it a revolution because we had one five years ago and nothing changed. Technically, it was certainly a coup, but on the other hand, the police were the first to fire on the demonstrators. I was there. I saw it. While it is difficult to find a legal justification for the interim government, it is understandable why people did this. By law, the new government is illegal, but de facto it had to happen. Still, we now don't know how to refer to Bakiyev in our reporting. We simply call him Kurmanbek Bakiyev.


What are the current working conditions for journalists in Kyrgyzstan?
The transitional government is very open and very polite to us as journalists. It is easy to contact people and to get answers and that was not the case before. I have the phone numbers of all the new ministers, including those of (interim Prime Minister) Rosa Otunbayeva - who incidentally is also twittering regularly. This morning we called the prosecutor and asked if it is true that an arrest warrant against Kurmanbek Bakiyev has been issued. "We cannot confirm this right now, but please call us again early tomorrow morning," was the reply.


This sounds like a positive change.
I'm currently optimistic. During the last five days, the KGB has exerted no pressure on us. We can now openly say that we were threatened by the KGB under Bakiyev, and I am glad we can. I have the feeling that we can currently influence the events. We have the power to not allow the new government to suppress the media.


In what way?
For example, we published an article today about a possible case of Internet censorship in recent days. It is about a website where films were seen showing leading opposition politicians having sex with their secret lovers. The films were still available on April 7, now the site has disappeared.

According to our research, I do not believe that the transitional government has censored the site, but that the creators of the page were Bakiyev supporters who most likely got cold feet and have now deleted the movies. Nevertheless, the new government will be very angry with us tomorrow because we've covered this. It is a test of how tolerant it is towards the media.

Another project we have just started is an anti-nepotism chart. We want to track all the relatives of the new government members and monitor whether they receive government posts. We want the new government to feel the pressure that we are observing them. We do not want them thinking we are their friends, because this is very dangerous for journalists.


What role does Russia play in what is currently happening in Kyrgyzstan?
The Russians are in a difficult situation. On the one hand they didn't like Bakiyev - but I believe the anti-Bakijev mood in Russia is mainly based on economic interests. Now it looks more as if the Russian media are trying to show how bad the situation in Bishkek is. "Bishkek has been completely destroyed," is what you can hear on Russian television. But this is not true. Today you can barely see what happened here a few days ago. The business people have replaced the broken windows, the bazaars are open, the streets are safe. For pro-government media in Russia, it is probably difficult to show that after a coup, the situation can also improve. After all, it could encourage people in some Russian regions to imitate this.


It seems Bakiyev is preparing for an uprising against the transitional government. Are you concerned that this could lead to a civil war?
This is one of my two major concerns. The other one is that censorship will return with the new government.


This interview was conducted by Mathis Winkler.

DW Akademie in Kyrgyzstan
DW Akademie maintains close relations with the media in this Central Asian country where freedoms have recently been increasingly curtailed. The Bakiyev regime blocked certain websites in March which had reported critically on the president's son Maxim Bakiyev. In addition to Kloop.kg, DW Akademie's media partners include the citizen radio Radiomost in Talas - the town where the protests against the Bakiyev regime began in early April. "The most important thing now is that the Kyrgyz government thinks of its people," says Radiomost journalist Rita Klyut, who reported on the protests in Talas. "Kyrgyzstan will not survive a third revolution." Klyut also administers Radiomost's blog, Talasmost.kg, which was created in cooperation with DW Akademie and has been nominated for this year's Prix Ars Electronica. The prize will be awarded this September in Linz, Austria.