An Internet shutdown amid protests in Kazakhstan disrupted everyday life and silenced media and media organizations, including a DW Akademie partner.

For six days in early January, an independent news outlet founded by a DW Akademie partner in Kazakhstan seemed to have vanished. At the time, widespread protests against a surge in gas prices had erupted across the resource-rich country, ultimately leading to 225 deaths and thousands of injuries and arrests. The government, in accordance with Kazakhstan's membership in the regional Collective Security Treaty Organization, called in troops from other member states, namely Russia, Armenia, Kyrgyzstan, and Belarus, to quell the protests.

Meanwhile, the country’s largely state-run Internet service sputtered or disappeared altogether between 5 and 11 January, in what many have called a civil rights violation. Government officials said they had cut communication channels operated by 'terrorists,' while leaving state-run media untouched. Mobile connections were mostly severed, leaving landlines and TV sets the sole means for most Kazakhs to reach the outside world.

This so-called “kill switch” has been deployed in other countries in recent years as a means of social control and to fortify a venue for disinformation and misinformation. It was not the first time it had happened in Kazakhstan, but it was the most complete, with the entire country’s Internet infrastructure blockaded. Initially, the government tried to ban access to various news sites, social networks and messaging platforms. But as many bypassed that with anonymous VPNs, state officials shut down the entire Web, affecting the average citizen and as well as the independent media aiming to inform them.

“The Internet shutdown definitely impacted the work of our organization,” says Igor Brattsev, a project manager with the DW Akademie partner MediaNet, based in Kazakhstan. “At the start of the pandemic, we switched to online remote work in implementing projects or for staff meetings. With the shutdown at the beginning of January, which threatens the entire project implementation process.”

It was chaotic, he said, partly due to state media filling the void of any independent news gathering. What Kazakhs were witnessing on the streets, he said, didn’t reflect what government news agencies were reporting.

Banks, any Kazakh wanting to communicate with a friend, colleague or family member, taxi drivers who use reservation apps, all were isolated from one another, and rendered somewhat blind in trying to understand what was happening.

“It totally affected our work,” said Vyacheslav Abramov, the founder of “vlast.kz”, an independent news website. In 2021, Abramov attended a DW Akademie online journalism training conference on press freedom. The 15 reporters and editors at “vlast.kz”, he notes, were actively covering the January protests.

So, too, were reporters for another independent website, “orda.kz”, and its chief editor, Gulnara Bazhkenova, says that there was trouble.

“One of the filmmakers for our YouTube channel was wounded by a rubber bullet,” she said. “Another was hit by a stun grenade.”

Although the website was banned and blocked, she added, her staff found it possible to communicate via Telegram. And they relied on friends in Russia and Georgia to get the news out, too.

Brattsev added that the shutdown impaired MediaNet’s factchecking platform factcheck.kz, one of its most strategic projects, but like with Bazhkenova, he and his staff came to rely on Telegram.

“Information was gathered either directly over the phone with government press offices or by contacting journalists from other newsrooms to exchange information,” he said. 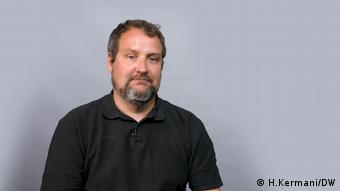 “It affected the country’s critical infrastructure,” said Oliver Linow, an Internet Freedom Specialist in Deutsche Welle’s IT and Cybersecurity department, whereby citizens were prevented from even civil communication among one another and with the outside world. Kazakhstan has an integrated digital economy; the Internet cut-off hindered everything from local online shopping to school registrations.

“It also limited how citizens could organize the protests,” Linow noted.

“I can’t say I was surprised because recent legislation allowed for the government to do this,” explained Abramov, whereby the government claimed the protestors posed a ‘terrorist threat’. “It paralyzed our work.”

Despite their servers being down, vlast.kz was able to rely on two correspondents outside of Kazakhstan – for security reasons, Abramov declined to state where they are exactly – who were connected to their colleagues via phone and instant messaging.

“It was all extremely dangerous, for us and for them,” he said.

Kazakhstan is now quiet, he added, but independent media like vlast.kz have focused attention on the numerous human rights violations and torture committed during the shutdown. And, according to Brattsev of MediaNet, there is more scrutiny now of political elites and the money that keeps them in power.

“This could lead to more unrest,” he said, “and the internet could be even more rigorously controlled.” A new draft law in Kazakhstan’s parliament aimed at patrolling cyberbullying could be used to silence dissent.

According to the nonprofit Reporters Without Borders, digital surveillance in Kazakhstan is widespread, with news sites, social media and messaging services regularly censored or shut down. Bloggers have been jailed or confined to psychiatric clinics. The organization ranked Kazakhstan 155 out of 180 countries in its survey of countries where press freedom is under threat (the higher the score, the more common the threat.) The U.S. nonprofit Freedom House describes Kazakhstan as a non-free state.

Digital authoritarianism on the rise?

Tracing apps, website blocking, and Internet shutdowns: During the Covid-19 crisis digital rights are under threat. Once in place, state measures to control Covid-19 risk being here to stay.

Afghanistan: How can messaging work safely in an internet shutdown?

Until now, Afghans have been able to use the internet more or less free of censorship and government control. But for how much longer? Here are some tools for safe communication, without relying on the internet.