In Cambodia a group of journalists are choosing facts over fiction | Media and Information Literacy | DW | 17.12.2021

In Cambodia a group of journalists are choosing facts over fiction

CamboJA, an association of journalists from Phnom Penh are fighting to improve access to reliable information during the pandemic. Now they are sharing what they learned. 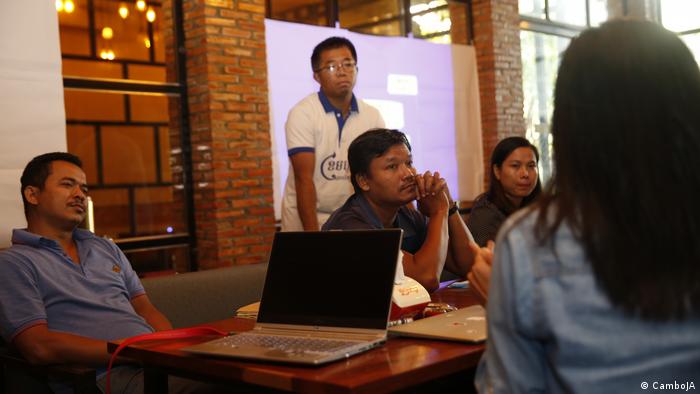 About CamboJA: Based in the capital city of Phnom Penh, CamboJA is a politically-neutral, membership-based association of journalists in Cambodia. It was founded in 2019 by 15 Cambodian journalists from various news outlets following a severe government crackdown on critics and independent media.

The association was admitted as an associate member of the International Federation of Journalists (IFJ) on January 11, 2021. On November 16, 2020, it was nominated for the “Independence Prize” in the Reporters Without Borders 2020 Press Freedom Awards. 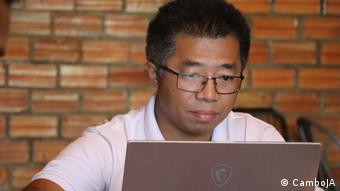 DW Akademie: With CamboJA, you head a network of investigative journalists that is involved in both monitoring and creating news content. What is the current information situation in Cambodia? How are people informing themselves, particularly about the ongoing pandemic?

Nop Vy: It is a well-known fact that journalists and Cambodian citizens face challenges to access information from public institutions. Journalists are usually granted permission to do interviews with government spokespeople, but in some sensitive cases, this permission is denied.

Cambodia is still without an access to information law, while the current press law is not powerful enough to push government officials to release information to journalists. As a result, it can be extremely hard for journalists to verify the information they need to write informed stories.

The situation around information access is intensified by the fact that citizens haven’t had access to a diverse number of media outlets, especially from independent media, since 2017. Instances of independent media operating either inside or outside of Cambodia have been extremely low. By contrast, hundreds of pro-government media outlets churn out pro-government content on a daily basis.

With regard to the pandemic, journalists, as well as everyday citizens, need up-to-date information, delivered fast, reliably, and on time. The limited number of government spokespeople available to speak with journalists presents a real hurdle to this.

What do you think is fueling the amount and spread of disinformation?

Most media consumption could be classified as passive rather than active. In such situations, the main source of media for an individual is mostly government created, combined with a lot of input from social media. Oftentimes, people lack the skills to determine fact from fiction. This is a crisis of limited media literacy skills and a lack of trust in reliable sources of information. Unlike in other countries, we don’t have laws and clear mechanisms which people can resort to in order to access accurate information.

We understand that you have initiated some activities that focus on fact-checking and information verification in Cambodia. What has worked well and what hasn’t?

CamboJA has been involved in a number of initiatives aimed at debunking false information. Naturally, some of our approaches have been more successful than others. One local organization, for instance, tried to create a fact-checking team, only to realize that they didn't have the required human resources and qualified knowledge to carry out the work.

Interestingly, there seems to be a tendency to carry out fact-checking and verification of government sources only. This is clearly not enough, as we believe that all kinds of sources should be taken into account. This work can be tiresome and time consuming and requires a degree of capacity training before it can be initiated. The allocation of the human, as well as the financial resources required for these activities is another challenge that shouldn’t be underestimated.

It’s also the unfortunate truth that carrying out this type of work can create risks for the fact-checking team themselves, as politicians sometimes attack one another by using hate speech and misinformation. Reporting and fact-checking really can feel like stepping into a shark tank sometimes.

Can media and information literacy help in a crisis like this?

One of the key roles that MIL practitioners can play is to promote the value of truthful, fact-based information to Cambodians. They can share knowledge and MIL skills with their family, friends and classmates. Those who are active on social media should take the opportunity to be mentors and trainers to those who have less knowledge of the risks of misinformation.

What would be some productive ways in which audiences could be helped to identify and resist false scientific information?

For us as journalists, one way to achieve this is through long-term audience engagement. We should start by running highly visible campaigns to raise awareness and educate people. Such is the scale of the intervention needed that we should share roles and responsibilities among a range of media practitioners.

Importantly, we should find ways to lobby the Ministry of Information to integrate fact-checking and MIL into the education system aimed at teaching secondary-school-aged students or younger.

To sum up, what are some of the main lessons that you have learned during the COVID-19 pandemic about information and communication management?

Building fact-checking capacity is a long-term project. Working collaboratively with strong cooperation partners is immensely helpful, as is being able to count on sufficient funding. Creating a long-term strategy is really the first step.

The COVID-19 pandemic has shown that it is more important than ever for people to receive accurate information. This helps them to stay safe and figure out ways to navigate their daily lives and work. However, just like a virus, fake news, misinformation and disinformation about the pandemic spread extremely fast. This means that, oftentimes, people find it hard to verify the information they encounter. By fact-checking myths and rumors, journalists play a key role in helping other people to make informed decisions.

This project is part of the global initiative "Transparency and Media Freedom - Crisis Resilience in the Pandemic" by DW Akademie and the German Federal Ministry for Economic Cooperation and Development (BMZ).