On World Press Freedom Day, May 3, 2015, a new study was presented on the current state of freedom of the press in Burkina Faso. The situation has noticeably improved, but it is also clear that much remains to be done. 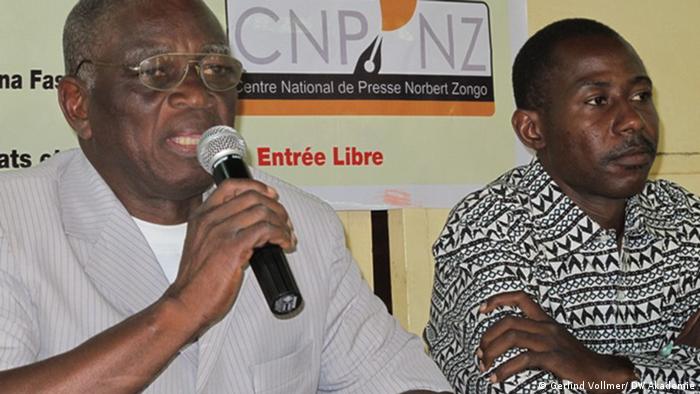 At the press conference: Jean-Claude Méda (left) with Ahmed Barro together with Norbert Zongo (CNP - NZ)

"There has been progress in the area of freedom of the press, but we must remain vigilant and make absolutely certain now that we don't lose focus or momentum," said Jean-Claude Méda, President of the Centre National de Presse-Norbert Zongo (CNP-NZ), when the study on press freedom in Burkina Faso was presented.

The CNP-NZ is a coalition of publishers' organizations, journalists' associations and trade unions. It is one of the most important lobby organizations representing the interests of journalists and the media vis-à-vis the state and society in Burkina Faso. The Centre de Presse is also working to improve the outdated laws governing the media as well as increase the salaries of journalists in the country.

In 2014, DW Akademie supported the activities of the CNP-NZ and financed workshops involving participants from all parts of society to address reforming media legislation and the right of access to information. The main focus of the workshops was to produce a study on the state of freedom of the press in Burkina Faso -the study that was presented by the Centre National de Presse on World Press Freedom Day on May 3rd in the capital of Burkina Faso, Ouagadougou. 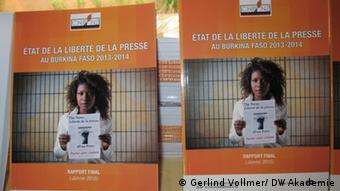 The most important findings: There are now fewer journalists in prison, fewer threats to journalists, and a greater variety of media outlets. This means that there are more different kinds of media in the country today than there were two years ago. However, violent attacks on journalists and media outlets still continue. The study examines the years 2013 and 2014, having questioned a cross-section of journalists and publishers as well as management staff from radio and TV. It also includes a random survey of Burkina's general population, both in the capital and the provinces.

In the middle of the study's information-gathering activities, a popular uprising in Burkina Faso led to the resignation of the country's long-standing president, Blaise Compaoré. For the team of social science researchers this presented a major challenge. "We decided to include a further series of questions about the uprising," said Paul Somé André, a researcher for the organization Nanebor Consult, which was tasked by DW Akademie and the CNP-NZ with carrying out the study. "It was important to contextualize the events within a two-year time span, so that we could still draw conclusions that were relevant to the entire period."

One of the findings was quite surprising. "I was shocked that almost a third of the people surveyed believed that violence against the media is justified," said Jean-Claude Méda, president of the CNP-NZ. "We have to re-think our strategy and make absolutely sure the public is better sensitized to the importance of freedom of the press."

Méda's words reflect the core of what DW Akademie is trying to achieve in Burkina Faso. With all of its activities, DW Akademie is working hard to help improve the quality of information across the country, as well as access to information, particularly in rural areas.

The goal is to strengthen awareness among the people of Burkina Faso of their fundamental rights. It is a challenging endeavour, given that more than 70 percent of the population is illiterate. Méda feels that in the past, the media have been too insular, too preoccupied with themselves. The study shows that the associations and journalists themselves must expand their horizons. That is why in 2015, the Centre de Presse wants to focus more attention on explaining the function, responsibilities and current state of the media to the general population. 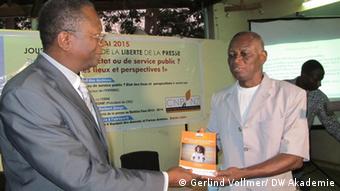 Jean-Claude Méda (left) hands over the study to Désiré Comboïgo

The study not only produced concrete information about press freedom, it also gave DW Akademie an overview of the general media landscape in Burkina Faso, providing an important basis for further projects. The citizens of Burkina Faso would like to see more balanced reporting, which is not currently available given the existing censorship and self-censorship. Ten percent of the journalists who were questioned admitted that their reports and stories were often censored. Even more of them -35% - reported that they practice self-censorship. They are shocking statistics that call into question media quality in Burkina as a whole. Added to this is the fact that journalists are chronically underpaid, especially in the private media, resulting in pervasive "crony journalism" and in some journalists becoming paid mouthpieces of specific interest groups. Well-researched reports and topics that have been determined by the journalists themselves are (still) rare in Burkina's media landscape. However, the evidence of positive trends is encouraging. DW Akademie will continue to closely track and support the development of the media in Burkina Faso.

Latest Study on Press Freedom in Burkina | pdf (in French)