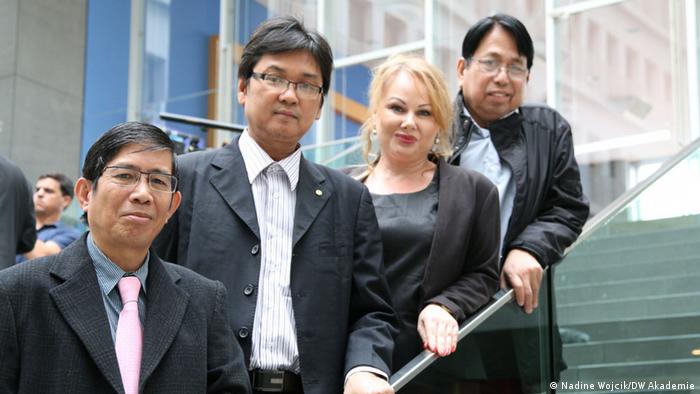 It was the first time that an acclaimed journalist from Myanmar spoke at the annual AIPCE (Alliance of Independent Press Councils of Europe) conference in Brussels. Pe Myint addressed an audience of some 80 participants from 28 countries and described the challenges he and his colleagues are facing. "It was a special moment for me to speak before such seasoned colleagues," he said. "There's still much to do in Myanmar and we can learn from the European experience."

Myanmar's interim press council currently has 28 members, ten of whom were named by the government while the other 18 are independent journalists, writers and publishers. Pe Myint said the press council is currently focusing on changing existing media laws in order to guarantee long-term press freedom in the country. The press council also aims to further develop its complaints office for the general population. 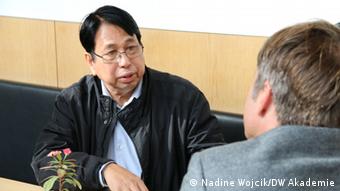 Journalist Pe Myint is calling for a comprehensive democratization process

The interim council, said Pe Myint, had so far received 85 complaints regarding ethically questionable reporting. "This might be a small number compared to those handled by similar offices in Europe," he acknowledged, but added that journalists in Myanmar have only recently begun enjoying any semblance of press freedom, while "the general public still does not know much about complaining."

Pe Myint expressed criticism of the current political situation in his country. "The government claims that the country is undergoing a democratization process, but many government offices and institutions haven’t been reformed." He said although the media sector in Myanmar has become increasingly free and independent since censorship was abolished in 2012, Europeans were still far more advanced when it came to a free press. While the politics lags behind, Pe Myint said he worries about new dangers posed to those new freedoms in light of several arrests of critical journalists and publishers.

Support from the general population

Myanmar's future independent press council is to act as a bridge and create more trust between journalists and politicians, Pe Myint explained, saying this would be an historical moment for Myanmar’s media sector. "For the first time we're seeing the rise of a new media and press culture – and it’s not coming from above. The people themselves are demanding it," he said. DW Akademie is involved in the transition, and through its journalistic expertise and long-term consulting services is supporting the establishment of a new press council. The fact-finding tour to Brussels and Berlin was one component of this. 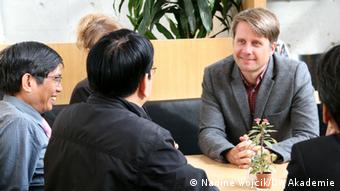 "The interim press council is more than a self-regulating body for the media and a complaints office for the general population," said Isabella Kurkowski, an expert on media self-regulation based in Yangon who is supervising DW Akademie's projects there. "Despite its young age, it is already commenting on media laws and acting as a watchdog for the maintenance and further development of press freedom in Myanmar. Its credibility is growing and it is now recognized by civil society, media, journalists and the government." She added that DW Akademie is also supporting the interim council by helping organize media dialogues with the judiciary, government and civil society to strengthen its role as an independent institution and guarantor of a free press.

Back at the conference, Pe Myint and his colleagues Khin Maung Htay and Chit Win Sein said they had found the workshops on media self-regulation and court reporting to be particularly helpful. "European colleagues discussed the media’s role during the trial of (South African Olympic sprinter) Oscar Pretorius," said Khin Maung Htay, "and to what extent the press had been neutral or independent." Khin Maung Htay is the co-founder and CEO of the media company Forever Group, which owns several media outlets, including the popular television channel MRTV4. He said he hoped that the future work of Myanmar’s press council would include close scrutiny of media issues in the country, self-criticism and a strong reference to human rights. Khin Maung Htay said he plans to hold the first regional conference for Southeast Asian press councils in Yangon, using the AIPCE conference as a model.

After the conference, the Myanmar delegation travelled to Berlin and visited Germany's Federal Press Office. "The journalists here are much more experienced and ask more probing questions than our journalists do at press conferences in Myanmar," said TV journalist Chit Win Sein. Journalists in Myanmar, he said, were mostly young and inexperienced. 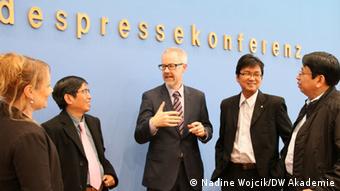 Delegation members also spoke with Nick Leifert who sits on the Federal Press Office's executive board, and discussed the advantages of an independent association for government press conferences. They doubted, however, whether Myanmar was ready for an institution like this, despite all the current changes. "Our government," said Pe Myint, "is not yet at the point where it will accept a truly free and independent press."


DW Akademie has been involved in developing a free and transparent media sector in Myanmar since 2007. This fact-finding tour for members of Myanmar's interim press council was one of many DW Akademie projects supporting media self-regulation in the country. They also include promoting a new press code, supporting the transition of state broadcaster MRTV into a public-service broadcaster, and supporting the development of independent community media. DW Akademie's long-term projects are financed by Germany’ s Federal Ministry for Economic Development and Cooperation (BMZ). DW Akademie is also part of the international consortium behind Myanmar's first journalism school, which offers both full and part-time degree programs.