Bildkorrekturen: IMS Students on the Stage!

Students of DW Akademie's International Media Studies (IMS) program had important roles at "Bildkorrekturen", an annual conference for young journalists. Held in Leipzig, this year's focus was on gender and development. 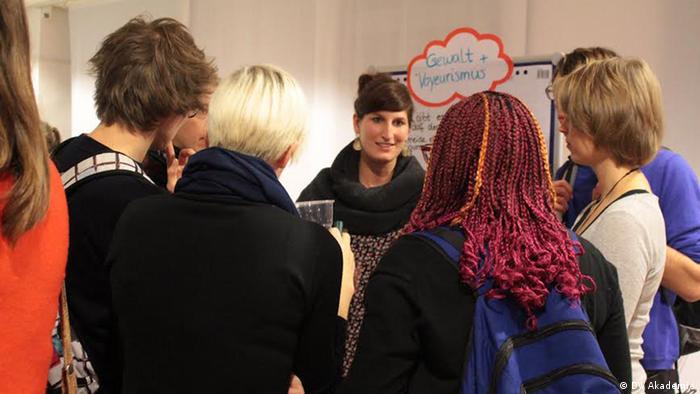 "Thank you for your efforts. We all did a great job and everyone complimented our work." Andrés Felipe González sent this message to his fellow IMS students after the "Bildkorrekturen" ("Image Corrections") conference had finished. González was one of the main project managers of this year’s conference, along with five other IMS students.

"Bildkorrekturen" was organized by the German development-related agency, Engagement Global. IMS students held their own workshop at the conference and presented their media projects involving print, audio, videos and a blog. 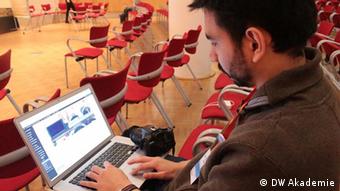 The students also developed an extensive social media strategy. Each project manager was responsible for one of the various aspects of the project, and these included a website, newsletter, social media activities, and a speed dating project. Other IMS students were active as well, with each one being assigned to a team.

This was the first time that the "Bildkorrekturen" website and the social media channels were continually updated.

"It was quite challenging, but we succeeded. This wasn't a one-man show - it was about teamwork. We were a great team and we worked hard," says Alexys Saravia, the project manager in charge of social media.

Using a phone for live streaming 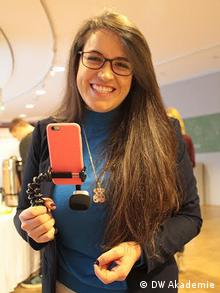 The social media team reported live from the conference using various channels. The Facebook team, for example, posted extensively on the panel activities, while the student responsible for the Facebook fan page put together information related to gender - the conference's main focus - and promoted IMS student projects and the institutions involved.

Another team tweeted live from the panels and discussions using the conference's own hashtags: #WeGender and #Bildkorrekturen.

The highlight of the social media strategy was using the Periscope app that made it possible, and for the first time, to stream the conference live via mobile phone.

People around the world were able to follow the event and interact by sending questions via twitter. Patricia Noboa used her phone to stream the event live using the Periscope app. "It was the first time for me, too. I was trying to describe the atmosphere, filming behind the scenes and talking to the participants so that the audience could get feedback from the participants themselves," says Patricia. 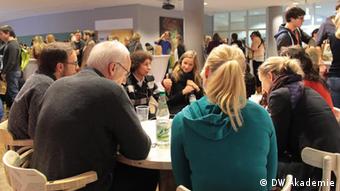 "The preparation and strategy proved to be good ones," says Petra Kohnen, head of the International Language Program at DW Akademie. She supported the IMS students during the conference. "They dealt extremely well with a big challenge like this - everything from the concept right up to the evaluation," she says. "They also met experts in the field, exchanged contacts and networked with other students. And," she adds, "they had a lot of fun."

Elsbeth Föger, a student at the Deutsche Journalistenschule München, was impressed by the IMS students. "They all come from the countries we were discussing," she says, "and they shared their different perspectives with us - right here, in an international setting."