Bangladesh: The potential of community radio

Many radio stations in Bangladesh produce unprofessional or politically biased reports. Community radio stations, however, could soon be providing reliable information thanks to DW Akademie Support. 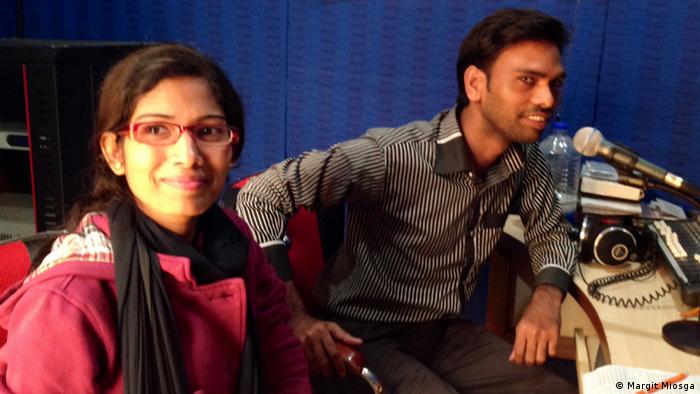 In a report on a health station listeners can hear chickens clucking in the background. They can hear meat sizzling on a street stand in a story about student life. And they can almost smell the stench of urine in a report about an indoor market.

That's radio for the senses – radio that puts listeners at the scene, making information relevant and easier to absorb. This is a basic component of radio journalism but it's new for community radio volunteers in the cities of Rajshahi and Sitakunda. After a one-week DW Akademie workshop on professional reporting, however, each of the 15 participants has produced a lively feature complete with background sound and interview clips.

"Radio can be so exciting"

"The volunteers hadn’t had any previous training," says Eberhard Sucker, DW Akademie's Country Coordinator for Bangladesh, "so we started with basic journalism skills. Then we'd hear enthusiastic comments like ‘I didn't know radio could be so exciting!"

While recording a market hall participants were overwhelmed by the stench of urine coming from some of the corners (in Bengali).

To date, in-depth community radio reports have been scarce due to a lack of equipment and transportation, so the bulk of programming relies on studio discussions with guests. This, though, hasn’t brought stations closer to their listeners.

Many of the station volunteers are in fact journalism students at universities in Rajshahi and Sitakunda. "While they're well-versed in journalism theory," says DW Akademie trainer Margit Miosga, "they often find it difficult to put it into practice." Working with local non-commercial stations gives them a chance to do this.

In the first phase of the workshop series DW Akademie helped participants produce new radio reports. Using practical exercises Miosga showed them how to set optimal recording levels as well as how to work with sound that was too low or distorted. DW Akademie also donated five recorders to each of the two stations so that volunteers can apply what they've learned at the workshops.


Participants reported on a major bus accident that had just happened in Rajshahi and where three women students had died (in Bengali).

In addition to acquiring technical skills and practical know-how, participants also learned how to present themselves. "This can be a challenge," Miosga says, "because reporters often appear to be too timid or overly respectful and they're afraid to ask critical questions." But as part of the community, she stresses, "reporters are the ones who are familiar with the pressing concerns of others who live there."

Media legislation, however, presents a major obstacle. "Community radio stations aren't allowed to report on state-level political issues," says Sucker, "so reporting is limited to local gender issues, nutrition and health concerns, and farming issues." Although they are allowed to report on local political issues, Sucker doesn't believe the volunteers are willing to take on local politicians.