A question of language: Staying informed during the corona pandemic | Fighting the Infodemic: Media in Times of Covid-19 | DW | 11.05.2020

A question of language: Staying informed during the corona pandemic

Reliable information that's distributed by independent media can save lives. Away from the mainstream, DW Akademie is supporting organizations that translate crucial information into local languages. 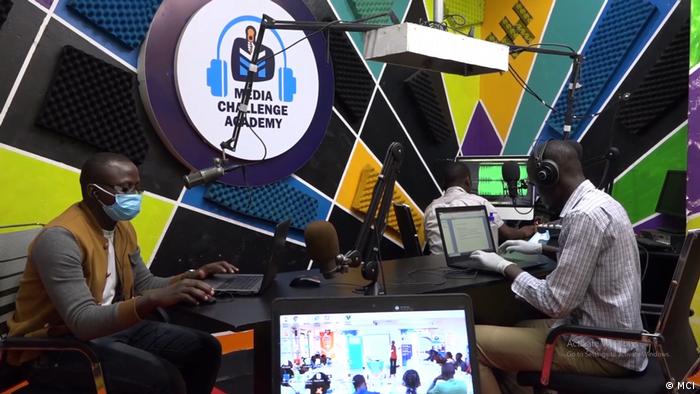 Abaas Mpindi is extremely busy. He is head of the Ugandan media organization Media Challenge Initiative (MCI) in Kampala and has brought together several graduates of MCI's training program for young media workers. His goal is to have official communications by Uganda's Ministry of Health on the coronavirus to be translated into as many local languages as possible. Most of the ministry's information on the virus and necessary safety measures is published in English only, despite the fact that approximately 40 different languages are spoken in Uganda. 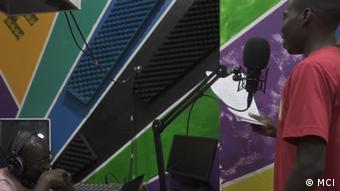 Particularly left out are people who live in rural areas and refugee camps, and who speak little or no English. Despite major advances in fighting poverty, Uganda remains one of the world's poorest countries. For years it has also had to cope with a massive influx of refugees from neighboring countries so that different nations and ethnic groups now have to live together. In times of crisis, access to reliable information becomes vital because rumors and false information can quickly develop into conflicts.

"We're producing audio versions of official information and uploading them to our website and the online platform SoundCloud" said Mpindi, "because we want to reach as many people as possible." Lingala, Ateso, Lusoga, Langi, Kiswahili, Somali and Arabic are just some of the 15 local languages where translated versions of the ministry's reports are now available. Additional languages are planned.

MCI has also launched an appeal for more volunteers to translate reports into other local languages. The audio files can be accessed on Facebook and the messaging service WhatsApp, and have also been distributed to local radio stations that broadcast in their regional languages. 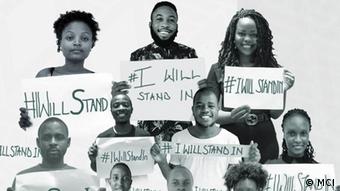 Since 2017, DW Akademie has supported the non-governmental organization MCI in offering a practice-oriented journalism training program. It also includes an online radio station. Mpindi and his colleagues are currently focusing the program on reporting on Covid-19, an infectious respiratory illness caused by the new coronavirus. MCI has also started #IWillStandIn, a social media campaign to support journalism during the crisis; it also provides information to active journalists on how to protect themselves during the pandemic.

Mexico: Information relevant to the regions

Periodistas de a Pie, a DW Akademie project partner in Mexico, currently publishes a daily newsletter on Covid-19 with reports from twelve local media that belong to the organization's network. They provide a regional overview, relaying which countries are closing borders, the extent to which indigenous communities are being affected, how the pandemic is affecting the local economy as well as migrant workers. These issues are of major concern to local areas.

Two network members have also begun producing texts and audio clips in indigenous languages to inform non-Spanish speaking as well as bilingual communities about the pandemic. The communities can access the short audio formats via messaging services such as Telegram or WhatsApp. 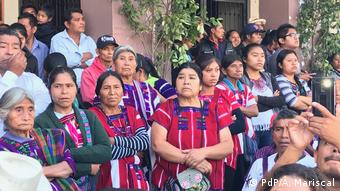 Given poor water supplies and a lack of health services, indigenous communities such as the Wixárikas in northwestern Mexico or the Maya population in the highlands of the southern state of Chiapas are especially vulnerable to the hazards of Covid-19.

Those with pre-existing lung conditions are especially prone in areas where they cook over open fires and breathe in smoke.  Those with diabetes or obesity – illnesses that are widespread in some indigenous communities – also have a greater risk of contracting the virus.

This means that education about protective measures such as mouth and nose masks is crucial, especially for the elderly and those with chronic illnesses, and in local languages that they can understand. Languages such as Wixárika, Tseltal, Tsotsil and Chol.

Information to counter fears of stigmatization

The audio files produced by the Perimetral and Chiapas Paralelo media also have a preventive aspect. Given certain social structures and traditions prevalent in many indigenous communities, fear and false information about the virus have led to distortions and conflicts, and with dramatic consequences.

In mid-April, for example, a member of an indigenous community in southeastern Chiapas committed suicide after being tested positive for the virus. He had been afraid of being abandoned by his community. Within such sensitive contexts, the audio files aim to inform societies and keep social fabrics together.