Armenia: A network of reporters focusing on remote village life

In Armenia, a DW Akademie partner formed a network of young reporters in remote regions. The goal: Telling village life in a multifaceted way and covering stories that usually don’t make it to a broader public. 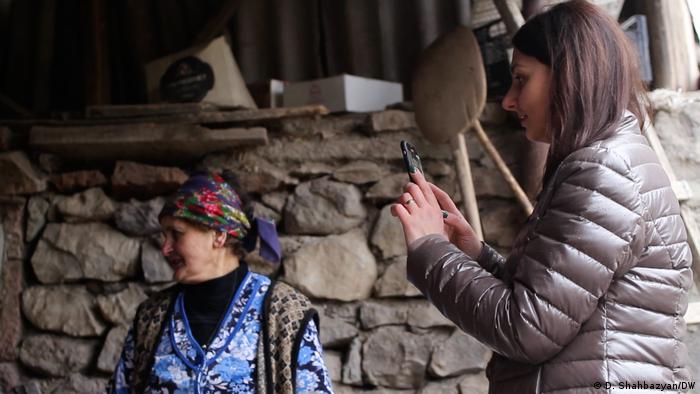 It’s a foggy and cold day in Norashen, a small village in the Tavush region of Armenia. There's chimney smoke in the air and the mountain range behind the village is barely visible.

Ester Zakaryan moved to this remote place four years ago and with that is an exception to the rule: She’s a young woman who had previously lived in Armenia’s capital city of Yerevan. Usually, it’s the other way around: Armenian youth are drawn toward city life leaving the small towns, villages, and hamlets behind.

Ester Zakaryan wants to tell village life as it is

Telling village life as it is

According to Ester, life in the village is no less interesting than in Yerevan and full of stories. She was disappointed by how the region is frequently portrayed in the media, she said, focusing exclusively on the fact that it is located close to the border with Azerbaijan but omitting almost every other aspect of living here.

This is what got her to start relating the stories herself, taking part in a journalism competition and eventually becoming a reporter for Tavush Media, a regional media that has formed a network of young reporters. 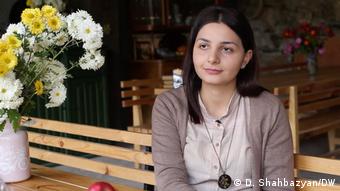 “One of my primary goals is to raise the problems of our village”, Ester Zakaryan said, “I don’t like that if there’s a problem, we try to hide it or cover it up. If I see a problem, for example with water or construction issues, I’ll definitely talk about it. Everyone here knows that.”

That isn’t to say that Ester would ignore the war between Azerbaijan and Armenia in the countries’ border region. “During the latest war, when I heard shots for the first time, the military units were right behind the mountain”, she remembered.

Closing the information divide between city and countryside

Tavush Media is a regional partner of DW Akademie in Armenia. It provides young reporters like Ester Zakaryan with a platform where they can publish articles, photo reports, and human-centered stories. The reporters are focusing on the lives of ordinary people in border villages, the challenges and the problems their communities are faced with.

Today, Ester is out to film in Norashen. She’s filming the traditional production of bread in a wood-burning oven on her smartphone. In fact, Ester is doing all her reporting on her phone. Mobile journalism presents opportunities to create content on the go and in remote locations. Now, everyone can tell a story about an interesting person living in their village, about a neighbor who has returned from a work abroad, about a night spent in a bomb shelter or about a summer spent working in summer pastures.

This de-centralized community journalism is contributing to closing an information divide in the Armenian media system: Those living in Yerevan only have very little access to reporting from the remote and rural parts of the country. Unless they really dig for and find information, a person living in the capital might only ever hear of a village if a government official visits there. But life in the city and the small villages is fundamentally different; relaying both – multifaceted – realities is vital for dialogue.

DW Akademie's and partners’ work with Tavush Media is part of the "European Media Facility in Armenia- Building Sustainable and Professional Media" project, which is funded by the European Union and the German Federal Ministry for Economic Cooperation and Development (BMZ).

In Armenia, factchecking disinformation on politics and war

DW Akademie supports reliable journalism in Armenia that factchecks disinformation and reports on corruption. The conflict over Nagorno-Karabakh and presidential politics have tested their skills.

War, conflict and crises put a strain on free media — at a time when they are needed most