Ramón García-Ziemsen: "A traineeship with us is not a one-way street: We want to learn from our participants!"

Every year, Ramón García-Ziemsen, head of Journalism Training, is spoiled for choice as his team selectstrainees for the next traineeship. Jennifer Pahlke, a former trainee herself, asked him about the selection process. 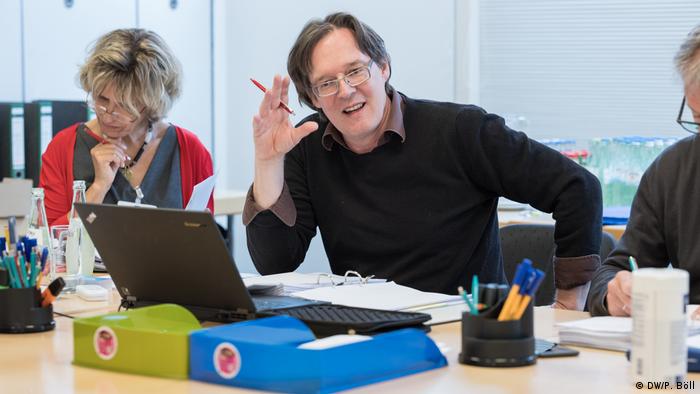 Are you happy or are you a bit anxious every year in November, when the application phase begins?

You mean anxious because hundreds and hundreds of people apply and all applications have to be read? No, because first of all, a team of experienced editors helps. And secondly, it's a great pleasure to meet all these creative people who are interested in DW. After all, a video has to be produced and an opinion piece has to be written, so you already get a good impression of who is applying. That's step one in the selection process. We then get to know those who make it through the selection round personally at our online assessment center - where there are tasks for the applicants to complete and, most importantly we have a chance to speak to the applicants in detail. This will take place in May 2023.

What other criteria are there?

There is no such thing as a perfect application, although if there were, it certainly wouldn’t start with a sentence stating that you've wanted to be a journalist since birth and have always wanted to apply to DW.  A good application is honest and creative. If someone doesn't have a lot of journalistic experience but has studied physics with enthusiasm, let's say, that's perfectly fine. And of course, it must also be clear that the applicants share our set of guiding values. We're talking about our zero-tolerance policy when it comes to discrimination, racism, antisemitism, among others.

Where do most of the volunteers come from?

It's different every year. In total, people from 50 countries have been trained so far. We currently have a group in which eight native languages are spoken, and all of them also have very different personal backgrounds, interests, passions and political attitudes. And that's wonderful, because training is not a one-way street for us: We want to learn from our trainees. That's why we also find young people with nontraditional paths into the profession or experts from another field who have no idea about journalism at all exciting. I am absolutely convinced that it's not just about the how, but the what. If you have nothing to say, I won't listen to you, no matter how pretty it looks.

Whether or not I decided to train as a journalist also had a lot to do with the question: "Will I get a job at DW after my traineeship?"

Of course. Almost all trainees stay with DW. They work as editors, reporters, correspondents and presenters. It is important that ex-trainees are able to apply what they have trained in, whether in projects or in the development of completely new formats. Once you're with us, if you want to, you usually have a really good future. Of course, DW trainees also receive good offers from other media providers from time to time, and some do leave. What's interesting is that many of them come back.  This was the case with me, for example. As a journalist, you have to question everything, including your own working environment. Yet by comparison to most, DW simply offers a lot of freedom, a good atmosphere, and the chance to change a lot of things.

Speaking of change and trying something new – are these a part of everyday life at DW?

Honestly, it wasn't so easy in the past. Today, the work can't be done any other way. The nagging question of whether TikTok and journalism go together has been answered at DW. Yes, they do. And even with a serious approach, as it is now included in the DW brand. For example, against the backdrop of the climate change conference in Egypt, a recently completed volunteer produced a TikTok video in which she explained global warming using a hair dryer, among other things. Several million people then watched it. Yet there is still one thing: We have to remain critical of all platforms. This is the case, for example, with Twitter, which I think is currently being managed into the ground by Elon Musk. If Musk's "liberated bird" is a bird of prey and hate speech is the order of the day, we might not have to be there anymore.

From data journalism and fact checking to podcasting and live broadcasting, there is a lot included in the training. Is there space to also think outside the box?

That's actually a core idea of journalistic training, as we understand it. Active participation in media conferences such as re:publica; a visit to the world's largest art exhibition, documenta; a fact-finding mission to Auschwitz - these are fixed components in the 18 month program. And not to forget, Deutsche Welle hosts the Global Media Forum, where media professionals from all over the world come to Bonn. Trainees then have an "elective stage," where currently trainees are stationed in Somalia, Pakistan, Egypt, but also at Reuters in Berlin. Getting out, getting inspired and challenged, but also questioning oneself, that's what it's all about. I can't remember which German poet wrote the sentence, but it could be written about our traineeship: "Without being flooded by the ‘other’, the ‘self’ withers."  This can also be supplemented by a saying about green knees, "I say, if your knees aren't green by the end of the day, you ought to seriously re-examine your life." I know exactly where that one came from: Calvin & Hobbes, the comic strip by Bill Watterson, which I love insanely.

So the trainees should also read comics...?

Not strictly, but hopefully lots of things that goes beyond our journalistic bubble. I just think that we in the big, established media houses are sometimes just too self-referential in terms of setting topics and implementing them. Hopefully the people we train have different approaches. This an important selection criterion, by the way; there are already enough people like me.