"Jerusalem is my passion!"

Hanadi Qawasmi is the new editor-in-chief of the Palestinian online portal Qudscom. Her team members are citizen journalists from Jerusalem. These budding journalists can sometimes be a handful. 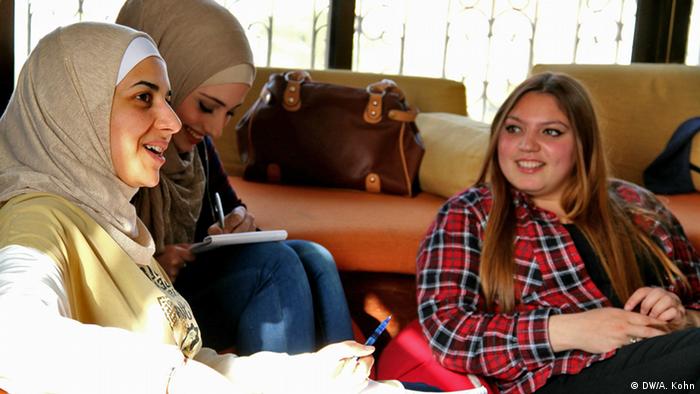 "Khalas Selfie!" (No more selfies!) calls out Hanadi Qawasmi, as she claps her hands. The eight students gathered in the meeting room are chatting and pouting into their cell phone cameras, but within less than a minute, Qawasmi has got their attention and they settle down. This is the second time that the 29-year-old has called the young journalists together for a meeting. She became editor-in-chief of the online portal Qudscom a week ago. The website is being redesigned and Qawasmi has come up with an idea. For this, she will need to work closely with her young colleagues.

The view from the conference room windows, out onto the narrow streets, reflects clearly what Qudscom is all about: namely, Jerusalem. To the right, and less than a ten-minute walk away, are the whitewashed walls of the Old City. The narrow alleyways that wind between the souk, historical sites and religious houses are crowded with Orthodox Jews with sidelocks, Arabs in kufiyahs, or headscarves, and robed priests. Tourists and heavily armed soldiers complete the picture. On the Qudscom ("Your Jerusalem") website, the young Palestinian journalists report from their own perspective on the colorful life thronging the city's streets. 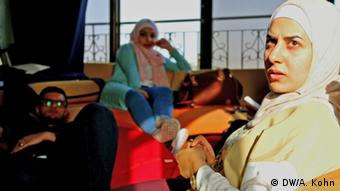 "Jerusalem is my passion!" proclaims Hanadi Qawasmi. "I was born here, I studied here." If you grow up in Jerusalem, she says, politics become part of life. "When the second Intifada broke out in 2000, I was just 14 and became interested in the conflict," Qawasmi recalls. "I would read the paper that my father brought home every day from the office, and I eventually decided to become a journalist so that I could report about my country." She studied journalism, and initially worked in corporate communications. She later worked as a freelance reporter, including for the Qartari-owned newspaper Al-Araby Aljadeed. In March 2016 she took on the post of editor-in-chief with Qudscom. "This allows me to learn even more about Jerusalem, and at the same time to teach my young colleagues about some of what I know," she reflects.

Outside, the muezzin is calling to prayer. Qawasmi and her team are discussing an idea she has for the Palestinian Children's Day on April 5. She would like her team to develop a series of portraits of children from Jerusalem, with each portrait representing one child's story, one destiny.

Qawasmi hands out various tasks, with a characteristic ironic grin briefly flickering across her face. The terms video, hashtag, infographics and vox pop are bandied about. Each student has his or her own speciality. Dunia, the girl who constantly plays with her hair, likes to write, while her friend Hanan with the pink headscarf prefers to work with videos. Ahmad, a cigarette tucked behind each ear, enjoys tinkering with infographics. 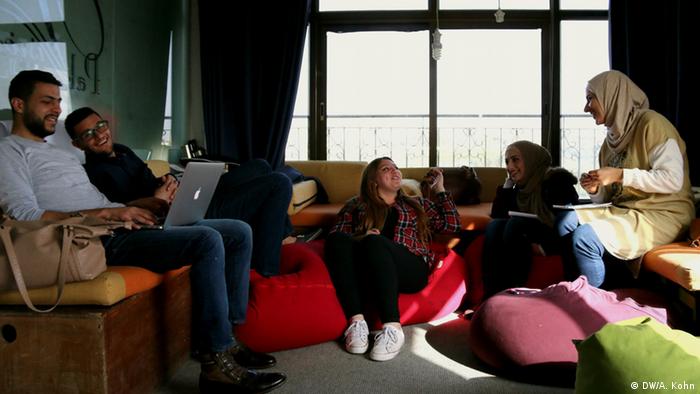 To work effectively, Qawasmi needs the respect of her young colleagues

"They each have their own life, their own approach to the city," Qawasmi says of her young colleagues. "They have stories about life at university, or on the streets, and I have facts and know the city's history. This way we can help each other to see Jerusalem from new perspectives." She says this helps them give users a more complete picture of the city.

Qudscom was established in 2015 by the youth organisation PalVision (Palestinian Vision), with support from DW Akademie. "This is one of our smaller projects, but one that we're very proud of," says Rami Naser Eddin ahead of the meeting. He is the head of PalVision. "The media convey values. That's why Qudscom reports on the lives of young people in Jerusalem, whether it's about social, cultural or family issues. This isn't about politics," says Naser Eddin. "Everything's about politics here!" interrupts Qawasmi sternly. Naser Eddin laughs: "She hasn't even been here a week, and she's already talking like she's the boss! But I like her critical approach."

The organization, he insists, is a grassroots movement, not an NGO. Most Palestinian NGOs, well…, he grimaces. "We are not affiliated with any party. There are no hidden agendas that dictate our actions. That means these young journalists are free to try out different things." He says the name and logo of the website, for example, were thought up by the editorial team.

Qawasmi's mobile rings and she excuses herself, leaving the room to answer the call. "I don't want to sing her praises too loudly in her presence", Nadir Eddin says conspiratorially, "but she's very clever. And she knows exactly how to handle the young students." The way she works, he says, lets him know he made a good investment. When she comes back into the room, he stares innocently at the ceiling, and Qawasmi laughs. 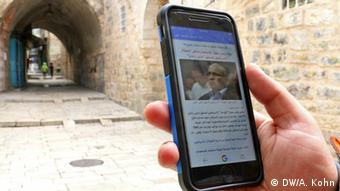 Church bells are ringing across Jerusalem. Qudcom's carpet is covered in crumbs from pastries that Qawasmi let her young team members buy from the market. Her ink-stained hands are constantly in motion as she answers their questions.
Research techniques, she says, are an important topic. "They're still learning how to find the information they need and how to evaluate it," she points out. "I have the experience and journalist's toolbox, and they bring their enthusiasm and ideas. It's a good mix."

The importance of having journalistic skills becomes clearer when looking at the most recent developments in the Palestinian media landscape. "We all used to watch Al Jazeera," says Qawasmi, "but when Al Jazeera began to focus more on Arab Spring events and less on Palestinian affairs, we began to watch Palestinian TV channels." She says these days, readers get most of their news from Facebook. Using her smartphone, she shows Facebook photos of Israeli military checks - a constant issue for Palestinians. She admits, however, that social media aren't a reliable news source, which is why the Qudscom journalists need to know how to put together reliable and well-researched reports. It's getting dark, and on the other side of town the Jewish Sabbat, or day of rest, is drawing to a close. The Qudscom meeting is also coming to an end.

One of the students sets up her camera as she prepares to interview Hanadi Qawasmi for her university newspaper. The editor-in-chief isn't ready to sit down yet, and calls across the room to remind the others of their tasks. Someone replies with a cheeky quip, at which Qawasmi grins and gives in with a shrug. She refocuses and turns to the interviewer, while her young colleagues gather to watch curiously from behind.

East Jerusalem: A portal by, and for, young Palestianians