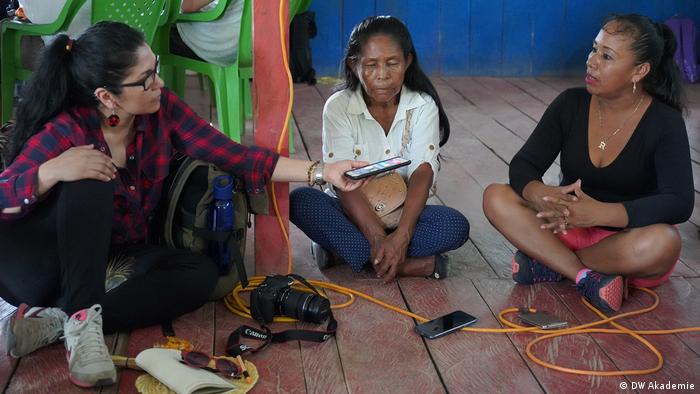 Colombia and the neighboring countries of the Amazon basin are increasingly the scene of serious environmental conflicts. Illegal mining and deforestation of the rainforest have led to a rapid disruption of local livelihoods and have intensified the effects of global climate change. Anyone who dares to resist this devastation is threatened or even murdered. Colombia is one of the most dangerous countries in the world for environmental activists. Media workers are also targeted by violent groups as soon as they report on environmental destruction and human rights abuses. Scientists have long warned of the disastrous consequences of the overexploitation of nature, but they do so in a language that is hardly understandable for the people on the ground. Major national media outlets often have conflicts of interest because they belong to conglomerates that pursue economic interests in other sectors, such as mining. The fight for land has also been a major cause of the decades-long civil war in Colombia that claimed hundreds of thousands of lives and of which the country is now only beginning to come to terms with.

In Colombia, DW Akademie supports media and citizen initiatives to initiate a public dialogue on environmental conflicts together with scientists. The aim is to join forces and promote the exchange of experiences. For example, veteran journalists work together with local citizen media to research touchy subjects as local knowledge and journalistic expertise complement each other. Local conflicts can then be made visible at the national level to increase the pressure on political decision-makers.

The exploitation of the Amazon region does not stop at national borders. That is why DW Akademie also supports partners in neighboring countries of the Amazon Basin with a regional strategy. The Colombian community radio station Vokaribe, for example, is developing consulting and training formats for local media projects in the Amazon region together with the Ecuadorian community radio network CORAPE. With the "Tierra de Resistentes" project, the Colombian journalist organization Consejo de Redacción has created a transnational information platform on persecuted environmental activists.

At the Universidad de Antioquia in Medellín, the Hacemos Memoria project promotes the journalistic analysis of conflicts. Learning from the past is a prerequisite for shaping a more peaceful and environmentally friendly future, especially in a country that is coping with decades of civil war.

Deployed Specialist: The Country Coordinator of the DW Akademie is based in Medellín and is a guest lecturer at the Universidad de Antioquia.

Nowhere is the commitment to environmental protection as dangerous as in Latin America. In a new report, the investigative data journalism project Tierra de Resistentes draws a shocking conclusion. (19.05.2020)

Coming to terms with the past: Colombian delegation visits German memorial sites.

How does a country work through its conflict-ridden past? To learn more, Colombian journalists and scholars visited Germany to find out how the country has been addressing its own past. (08.07.2019)

Despite the challenges, Colombia is speeding along the path toward digitalization. DW Akademie works to widen access to quality media — no mean feat in a country tormented by conflict. (18.02.2019)

Misinformation and fake news have played a significant role in Colombia's 2018 parliamentary and presidential election campaigns, but a digital fact-checking project has been finding out what was true – and what wasn't. (05.09.2018)

Colombia: Radio from the street

People in the southern districts of the Colombian city, Barranquilla, rarely make the news. If they do, the reports are seldom positive. The community radio station Vokaribe wants to change this, using a mobile studio. (20.08.2018)

History will not be forgotten in Colombia

How does a country work through its conflict-ridden past? To learn more, Colombian journalists and scholars visited Germany to find out how the country has been addressing its own past. (08.07.2019)