As members of Women@Web, two women in Rwanda and Tanzania strive to empower women and enhance their participation in the digital sphere | Africa | DW | 11.04.2022

As members of Women@Web, two women in Rwanda and Tanzania strive to empower women and enhance their participation in the digital sphere

Gender-based violence and harassment online can make navigating the web exhausting or even dangerous for women in Rwanda and Tanzania. But using the internet to network and work online also offers opportunities. A participant at a Women@Web regional meeting in 2019

As the COVID pandemic has shaped the past two years, the working world has had to adapt, with many employers shifting to a virtual environment. Women the world over, studies show, have had an especially hard time, taxed with balancing childcare and occasionally having to navigate a hostile digital sphere.

Founded in 2017, the project Women@Web has been a resource for journalists, politicians, and human rights activists, among others, who have been confronted with various forms of gender-based online violence. The pandemic has intensified this behavior, but it was pervasive and directed at women before the global health crisis began. 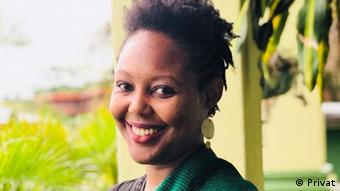 "There are opportunities in working online," says Natacha Umutoni, who has trained women in Rwanda to work safely online. "But it's important to recognize abuse and to have a network that can support you."

Since 2018, Umutoni has hosted events and workshops with DW Akademie’s Women@Web project in Rwanda, to both educate women about staying safe online and to also find ways to expand their professional lives.

There's no choice: women need to be online

In Tanzania, as well, the Women@Web regional project has sought to help women successfully and safely navigate the web. 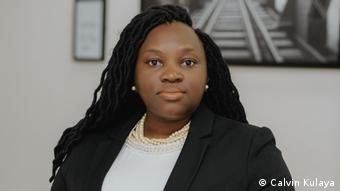 "Whether or not to be online isn’t really an option today for women," says Asha Abinallah, especially for women who want financial independence. "So much in business today has to do with the digital economy. The pandemic increased that."

Prejudice adds to the unaccommodating online sphere for women: In some remote areas of East Africa, according to Abinallah, it's not uncommon to look with suspicion at a woman confidently using her Smartphone. Perhaps it signals her independence, or maybe some believe that the woman is unable to make sense of what she’s reading.

Abinallah has worked for years in projects related to innovation, technology, information, Internet governance and media. She holds a master’s degree in new media, and she says she recognizes that it’s not a given that women will know how to protect themselves online.

In Tanzania, she says, university students, women journalists, women professionals and women politicians, though capable and talented in their fields, may have had to learn the hard way that their aspirations aren't always respected and admired by everyone. Online attacks and trolling can intimidate and hold them back. This applies to the whole East African region, as well, says Abinallah.

Creating opportunities for themselves

In Rwanda, Umutoni also trains others in digital literacy, while advocating for freedom of expression and online safe spaces.

"Rwanda has a strong oral storytelling tradition," she says, "and I grew up listening to the radio a lot, which included theatre, children's stories, music, and also lyrics were explained. This later sparked an interest in how content is created and formed for different audiences, which eventually led me to working in communications and marketing."

Her work includes training university students to recognize potential problems ahead of starting their careers. Umutoni has also worked with more than 100 women journalists who spend their workdays online, helping them use their skills to attract viewers and readers. And she encourages women to understand how encryption works, and to be aware of their digital footprint.

"Do you know what shows up when you Google yourself?" she asks other women. "Is your address posted on your Facebook page? Online privacy is critical."

She herself had few to guide her along the way starting out.

"I had to figure out everything for myself," she says. "I used Google and other online resources to create a good CV, write a cover letter, create a strong LinkedIn profile, and network with people with whom I shared interests or aspired to do what they do. That’s why it’s important to include digital storytelling in a curriculum, to show students how they can create opportunities for themselves – but also stay safe – online."